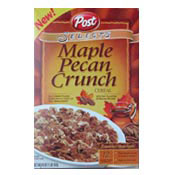 
The cereal box in 2008, described this Post Selects cereal as a "whole grain cereal inspired by the taste of home-baked maple pecan muffins."

Maple Pecan Crunch Cereal has been reviewed on MrBreakfast.com.

Click here to read the review.
Upload an image for this cereal
Comments About This Cereal
What do you think of Maple Pecan Crunch?

My favorite cereal ever and I'm over 50. What a shame it was discontinued!

By Upset In WA

I just don't understand how this cereal could be discontinued. It's was the best! Very upset at the company!

This was my favorite cereal, and I could even feel like sort of an adult while eating it. Sigh, back to Cinnamon Toast Crunch.

Best Cereal that had ever been on the market. Why, why, why was it discontinued?

Me and my grandmother ate it all the time together. I would to have that memory back.

The best cereal ever. I found out today that it has been discontinued :(. I sent a note to Post expressing my dissatisfaction. Please do the same if you love this cereal.

Stupid Post Cereals finally makes a cereal that a lot of people love and then they yank it. Nice :{

Love this cereal and can't find it anywhere in Colorado where I just moved.

I love this cereal, but none of the stores in my area carry it anymore. I'm afraid it has been discontinued, as I don't like many cereals.

I don't like a lot of cereal and this was my favorite. I am so ticked that Wal-Mart in Winchester does not carry this now. I have looked in Richmond, Winchester, Portland and Muncie and it really makes me mad that I finally found a cereal I liked and it is no longer anywhere near here!