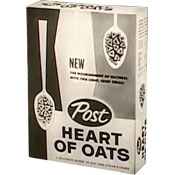 
"Theses dandy, delicious, crisp little hearts are made with oats... the most muscle building cereal brand there is."

The cereal pieces in Heart of Oats were intended to resemble hearts. In reality, they looked like misshapen triangles which often broke apart leaving a bowl of warped triangles and check marks.

The cereal was an attempt by Post to grab a share of the Cheerios market from General Mills.

Heart of Oats main pitchman was a cartoon lion named Linus The Lionhearted. After a short career with this cereal, Linus went on to pitch the more popular cereal Crispy Critters and eventually got his own network cartoon show in 1964.

Housewife: But without cooking. That family of mine needs nourishment... lots of it. The kind that oats can give them.

Daughter: And you know something? They taste just a little bit better. 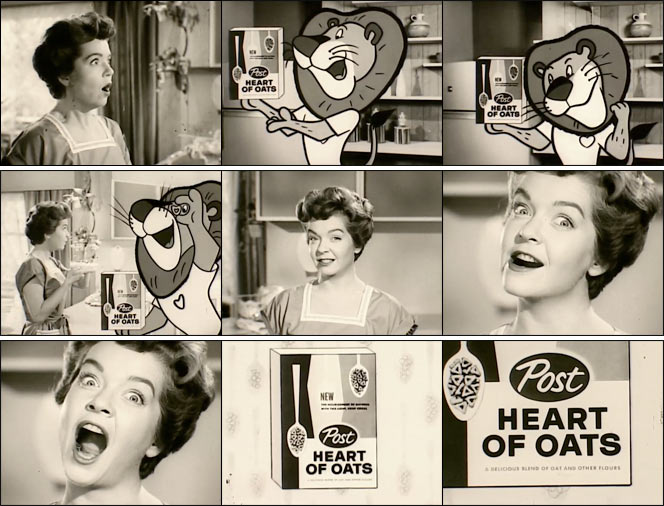 A woman is startled by a large animated lion in her kitchen. The lion, Linus The Lionhearted, touts new Heart Of Oats cereal. He encourages the woman to try the cereal and gets an energetic reaction.

Linus: Rrrrr.... I am Linus The Lionhearted with a new delicious, crisp cereal... Post Heart Of Oats. Gives you the nourrrr-ishment of oatmeal. What do ya say?

Linus: Yeah. The nourrrr-ishment of oatmeal.

Late 50's Heart of Oats Cereal Ad
Upload an image for this cereal
Comments About This Cereal
What do you think of Heart Of Oats?
By DPJohnson

You can now get a cereal similar to this one - Quaker Whole Hearts, which are somewhat sweet.

I felt sorry for Linus (the Lion) when every time he mentions crispy critters, the animal cereal pieces stampeded (the one and only cereal it comes in shaped animals).

Even though Linus was a spokesman of 2 now defunct Post cereals, the voice of him is now gone (Sheldon Lennord).

Who came first Tony the Tiger or Linus the Lionhearted? They seem a little bit similar. They're Grrrrreat vs Nrrrrrroushment. Hmmm.