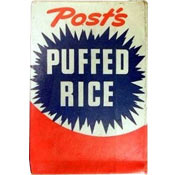 
All we know about this cereal is that it existed. We found one image of a single-serving box that was said to be from the 1950's. We haven't been able to verify that time frame.

We can guarantee that this cereal was introduced after 1904. That was the year that Quaker introduced puffed rice by shooting it out of canons at the World's Fair. 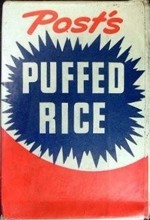 Submitter: jeffrey
Uploaded: 8/5/2010
Additional details
Upload an image for this cereal
Comments About This Cereal
What do you think of Puffed Rice (Post)?
There are no comments yet for this cereal. Be the first! Was it good? Was it bad?
Do you have information not included in the article? Let the world know!