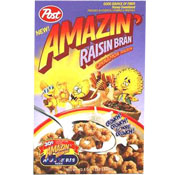 
This short-lived cereal from Post came in two varieties: Amazin' Raisin Bran and Amazin' Cinnamon Raisin Bran. The cereal pieces were O-shaped (ala Cheerios). The cereal box featured three bright yellow characters, one with a head like a lemon, one with a head like a bush holding a clip board and one wearing sunglasses with an Arsenio Hall 80's haircut. Text on the box read, "Crunch! Crunch! More Crunch!"

Upload an image for this cereal
Comments About This Cereal
What do you think of Amazin' Raisin Bran?
There are no comments yet for this cereal. Be the first! Was it good? Was it bad?
Do you have information not included in the article? Let the world know!