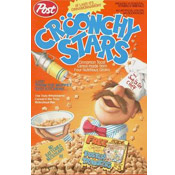 
This cereal was described on the box as a "cinnamon toast cereal made from four nutritious grains" and "the truly wholesome cereal in the truly ridiculous box." Additional text on the box declared: 1) "At last! It's Cinnamonnamony"; 2) "Live! From the Muppet Test Kitchen"; and 3) "No batteries necessary!"

The back of the box offered the following "Eating Directions" from the cereal's mascot, The Swedish Chef: It's said that Croonchy Stars were conceived by Muppets creator Jim Henson. A life-long fan of breakfast cereal, Henson liked the idea of fitting as much fun and nonsense on a cereal box as space would allow. 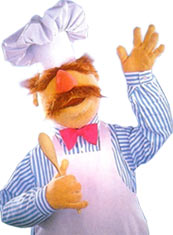 This character first appeared on The Muppet Show in 1975. He was known for giving cooking demonstrations in an exaggerated, impossible-to-understand Swedish accent (ex. "Hurdy burdi, hamburginsky bullski, bum sergudd").

After The Muppet Show was cancelled, the Chef made appearances in popular Muppet movies like The Muppets Take Manhattan and The Muppet Christmas Carol.

Croonchy Stars Rolling Pin Headache Ad
Upload an image for this cereal
Comments About This Cereal
What do you think of Croonchy Stars?

The crunch of Croonchy Stars was vaguely reminiscent of dense Styrofoam... but in a good way, if that makes any sense. Tasted pretty good, too.

Croonch Croonch! I want this cereal. I only got to eat it once, but I want it as a dying wish.

Pleaseeeeeeee... please bring this back! I miss it and am craving it soooo bad!

I thought it was great! A strange but compelling mixture of sugar and cinnamon on those little stars. I still even have the Swedish Chef doll that one could send away for, by way of a cut-out coupon on the back of the box.

Remember the "Find / Make a diamond" activity on the back of the box?

*sniff sniff* My oh my have I missed the assaulting "Croonchy star of death" attacking this poor chef for Sweden. Dang, now I want to eat the cereal and cry (and it didn't actually taste all that good). I so missed this. Another one of many cereals I wish that was still around. Okay, time to go cry alone in a corner. (Picks self up off floor & walks away sulking). I really miss this one.

This must return! How great would it be if they brought it back for a limited time while the Muppet movie is in theaters.

I too long for this cereal of my youth to return. Bring back Croonchy Stars!

I miss this cereal so much... I'd love to see them make it again.

This was my favorite cereal as a child. I tell people about this cereal and they look at me like I am crazy. Finally, I have a resource to show them that it did exist. Bring this cereal back!