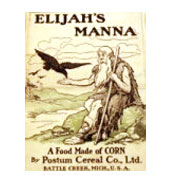 The box featured the Biblical Prophet Elijah kicking back on a rock while a raven is shown either plucking cereal from his hand or placing cereal in his hand.

Church groups were outraged over the use of Elijah as a cereal mascot. The book Cerealizing America by Scott Bruce and Bill Crawford has a quote from C.W. Post who was outraged at the outrage over his new cereal:

"Perhaps no one should eat angel food cake, enjoy Adam's ale, live in St. Paul, nor work for Bethlehem Steel... one should have his Adam's apple removed and never again name a child for the good people of the bible."

Post stuck with his guns until he noticed the Biblical backlash was cutting into his sales. In 1908, he renamed the cereal as Post Toasties. Micky Mouse would later replace the Prophet Elijah on the box.

Upload an image for this cereal
Comments About This Cereal
What do you think of Elijah's Manna?
By Ben In WA

Nice bit a cereal history. Thanks.

I want you to snatch the pebble from my hand.

Some of the rejected names found in the ad agency's trash (possibly deemed 'offensive'):
-Jesus Christ! That's good.
-I'll Be Dammned if it ISN'T Corn
-Unsweetened cattle feed in a box.
-There's kids in Africa starving right now so shut up and eat it.
-Lil Bits O'Salvation.
-Crack-o's.
-CeE DuBBz b'rrdfood (well they just cut the picture off a baggabirdfood.)