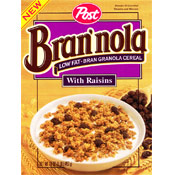 
The slogans for this short-lived cereal included "More than granola, Bran'nola" and "So delicious, you won't believe the name". It came in two varieties: Original & With Raisins.

The back of the box (of the raisin version) gave the following description:

"The Fiber From Bran And The Great Crunchy Taste Of Granola.

"Post Bran'nola is a deliciously different kind of cereal. It has the natural goodness of wheat bran and other wholesome grains oven-baked into crunchy granola clusters. Then it's toasted to golden perfection for a delicious taste like no other cereal.

"But Bran'nola is not just great tasting, it's good for you too. It's low in fat, a good source of fiber and provides 10 essential vitamins and minerals.

"Bran'nola... A whole new kind of cereal that's perfect for today. Try both delicious varieties: 'Original' and 'With Raisins'." 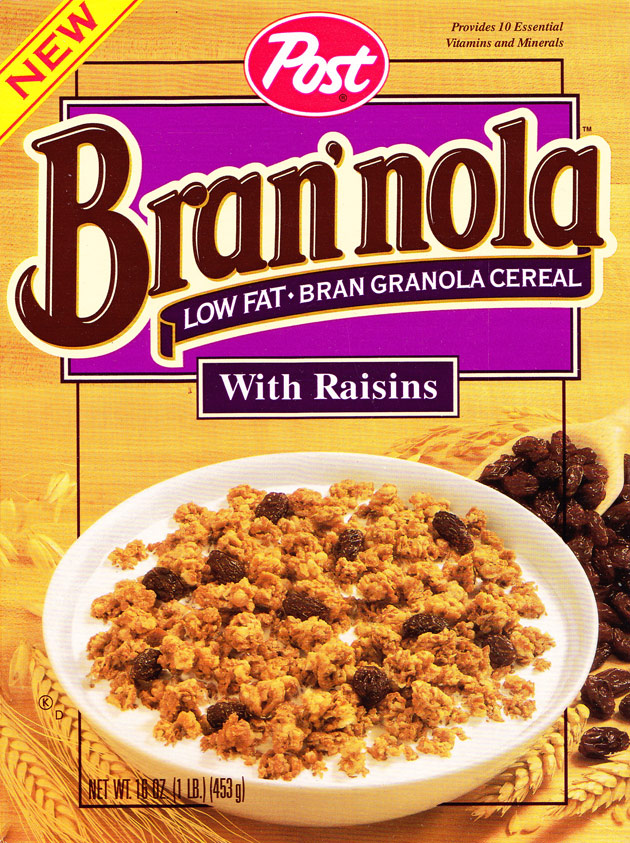 The first 9 ingredients listed on the nutrition panel for the raisin version of this cereal were whole wheat and wheat bran, sugar, oats, rice, barley, partially hydrogenated sunflower oil, corn syrup and honey. 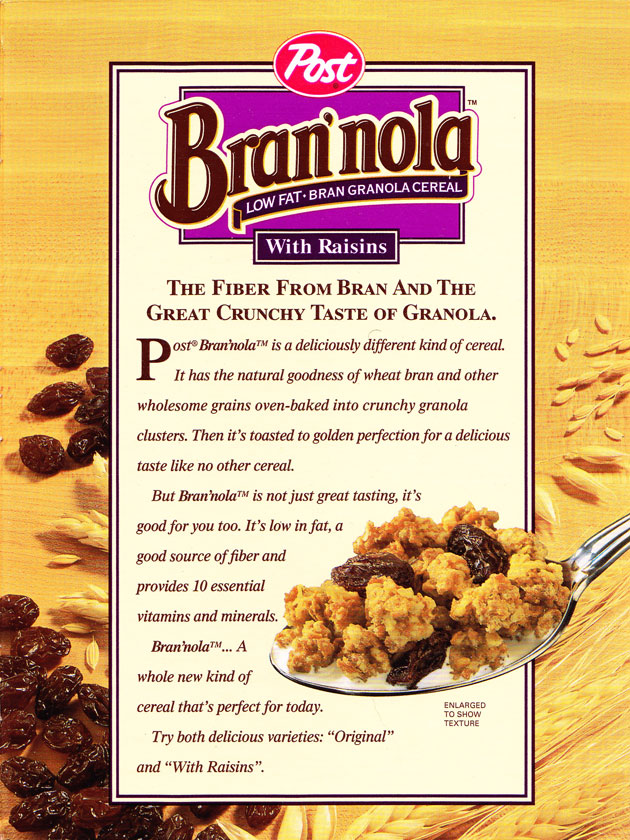 Here's a transcript from a 1993 television commercial for Bran'nola cereal:

Wife: Here you go. Try this. It's a new cereal.

Wife: Bob, it's more than granola. It's Bran'nola with a "b" like your name.

Bob: Ah yeah, but that taste. Those crunchy golden clusters baked with a touch of honey. And look... raisins... mmm...

Wife: And fiber from bran.

Now Showing: 1993 Bran'nola Cereal Commercial
Upload an image for this cereal
Comments About This Cereal
What do you think of Bran'nola?

Bring Bran'nola back. I loved it!

I want some! I never tried it, but the commercial makes it seem like something I'd like a lot.