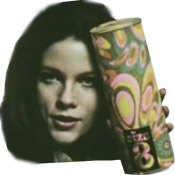 
This cereal likely never made it beyond the development stage. The only evidence of its existence is a 1969 commercial produced by the Benton & Bowles Advertising Agency. We've found no actual Size 8 cereal containers or other advertising material to indicate the cereal ever made it to market. The commercial itself is a series of still images which indicates that it was likely a spec commercial not ready for broadcast. Size 8 cereal is included in our database because it's interesting and nostalgically sexist.

Within the commercial, you see that the cereal came in a pastel canister like an oversized Pringles canister. The name of the cereal is derived from what was considered an ideal dress size for women in the late 60's. 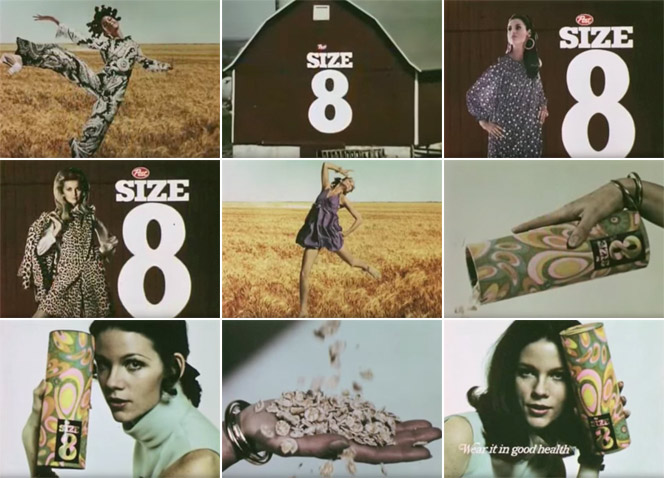 A voice-over during the commercial describes who the cereal was aimed at and what the cereal might have been:

"There's a knack to putting yourself together. For the woman who has the knack, there's a new way to stay beautifully fit... Size 8. Size 8... for the woman who gets too hungry for starvation diets, too active to live on empty calories. New Size 8 from Post, the delicately toasted puffed wheat flake cereal that gives you the extra iron you need because you're a woman. Extra iron for energy all day long. Lite, nutritious Size 8 breakfast cereal sticks to your ribs, not to your hips so... 34, 24, 34... go get Size 8 and wear it in good health."

This attempt at a cereal may have been Post's response to Diet Frosted Rice Puffs and Diet Frosted Wheat Puffs which had been introduced by Quaker two years earlier in 1967.

The concept of Size 8 cereal seems to have come from a male perspective on how women should look and how they should eat to achieve a perky figure. In more recent years, the idea of cereals designed to help women achieve ideal weights has actually made it to market, but with more of a female perspective as exemplified by Curves cereal from General Mills.

Now Showing: 1969 Post Size 8 Cereal Commercial
Upload an image for this cereal
Comments About This Cereal
What do you think of Size 8?
There are no comments yet for this cereal. Be the first! Was it good? Was it bad?
Do you have information not included in the article? Let the world know!