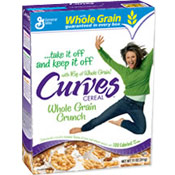 Curves Whole Grain Crunch is packed with important vitamins and minerals to make this change for good a healthy one.

100 calories per serving! Deliciously crunchy toasted flakes give you 1/3 of the whole grain you need every day.

It's interesting to note that the Honey Crunch variety of the cereal - the one without "whole grain" in its title was promoted as having more whole grain per serving with "over 1/2 of your whole grains each day".

The cereal has been said to taste similar to Total and Wheaties cereals with lighter, crunchier flakes.

Both varieties of Curves cereals were promoted with the tag line "... take it off and keep it off." 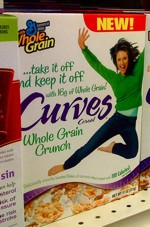 Submitter: Heather_S
Uploaded: 6/25/2008
Additional details
Upload an image for this cereal
Comments About This Cereal
What do you think of Curves Whole Grain Crunch?

It tasted okay, but I remember the texture of the flakes being a little off - they were like 50% crunchy and 50% tough and chewy. Not my favorite - but I do like the concept of a Curves cereal if they ever do a New and Improved version.

I love this cereal because the taste reminds me of my beloved Team Flakes. I believe it may be discontinued. Just in case I bought all the boxes I could find.