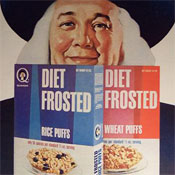 In 1967, Quaker introduced Diet Frost Rice Puffs and Diet Frosted Wheat Puffs simultaneously. The cereals were touted as the "breakfast of losers" in magazine ads. A one cup serving of the Rice cereal contained only 56 calories and the same size serving of the Wheat cereal had 51 calories. Despite these impressively numbers, the Diet Frosted line disappeared shortly after its introduction.


Fewer calories than a cup of orange juice (and you don't even have to add sugar). 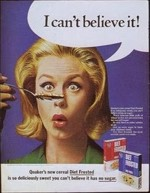 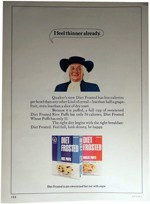 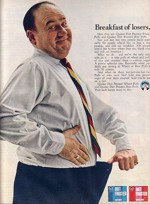 Submitter: DeeJay
Uploaded: 9/19/2008
Additional details
Upload an image for this cereal
Comments About This Cereal
What do you think of Diet Frosted Wheat Puffs?

Based on the timeframe, I'm guessing it was sweetened with cyclamate. Cyclamate was banned in 1969, and no other artificial sweetener would work on cereal without tasting nasty (like saccharin) until aspartame came out in the early 80s. What I wonder is how they kept the cereal from getting soggy without sugar. Also, current nutrition labels measure cereal by weight, and both grain and sugar have the same number of calories per weight. The ad copy implies that you would measure your cereal by volume, like a bowlful - puffed cereals are mostly air. But you might get hungry sooner if you're eating a particularly airy cereal.

This was enjoyed by Meher Baba. Was sent to Him by Kay.

Wow! Why don't they make this anymore?