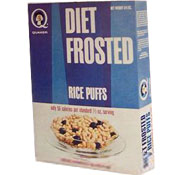 
In 1967, Quaker introduced Diet Frost Rice Puffs and Diet Frosted Wheat Puffs simultaneously. The cereals were touted as the "breakfast of losers" in magazine ads. A one cup serving of the Rice cereal contained only 56 calories and the same size serving of the Wheat cereal had 51 calories. Despite these impressively numbers, the Diet Frosted line disappeared shortly after its introduction.

Fewer calories than a cup of orange juice (and you don't even have to add sugar). 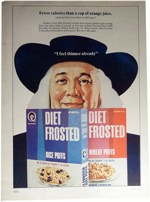 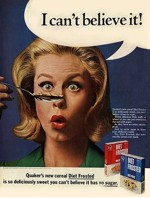 Submitter: Crawfish Mike
Uploaded: 3/18/2008
Additional details
Upload an image for this cereal
Comments About This Cereal
What do you think of Diet Frosted Rice Puffs?