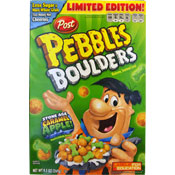 
The complete name of this cereal is Pebbles Boulders: Stone Age Caramel Apple! The cereal pieces are round tan boulders and green dinosaur bones. The first three ingredients listed are whole grain corn, whole grain oat flour and sugar. The front of the box describes it as a "wholesome, sweetened cereal" with "less sugar and more whole grain than Honey Nut Cheerios."

The back of the box has a story called "The Mystery of the Applesaurus!" about the cereal's origins and its relationship to the cereal's mascots.

"While digging in the Bedrock quarry, Fred (Flintstone) and Barney (Rubble) unearthed some fossilized green bones! Could they be from the legendary Applesaurus - a dinosaur whose bones, it's said, tasted like apples? Did this Stone Age apple eater really exist? Dig up some bones yourself in Pebbles Boulders and let your taste buds decide!" 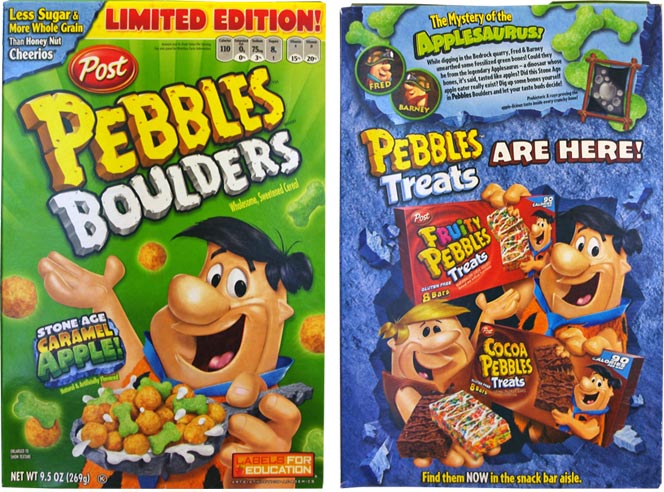 Pebbles Boulders Cereal has been reviewed on MrBreakfast.com.

Click here to read the review.
This cereal belongs to the following Mr Breakfast Cereal Families:
Upload an image for this cereal
Comments About This Cereal
What do you think of Pebbles Boulders?

Wow, not sure how I missed this release. By the sound of the other people commenting on this cereal, sounds like I didn't miss much. I'm often surprised General Mills never released a new monster cereal with this apple caramel flavor. Seems like an obvious choice for Halloween. I guess it didn't work for Post though.

I found this cereal bland and tasteless. I was very disappointed and would never buy it again.

The best! An apple cereal sounds weird, but it tastes good. Try it and I bet you agree.

My kids won't eat this, so guess who gets to finish the box? That's right - dear ole MOM! Initially, it tastes ok, crunchy, carmel appley. But then it has a funky nutty aftertaste - yuck! I predict this one will also be discontinued in the not so distant future.