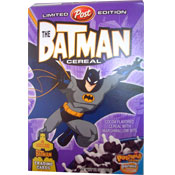 
The Batman cereal was a limited-edition cereal produced by Post as a tie-in to promote an animated television series titled The Batman.

It was promoted on the box as being a "cocoa flavored cereal with marshmallow bits". The chocolate cereal pieces were made to resemble the shape of a bat, but more often than not, the pieces looked more like warped letter "E"'s.

It was commonly perceived that this chocolate cereal didn't taste particularly chocolaty, but it did provide a satisfying crunch.


Click here to see all cereals from Post.
This cereal belongs to the following Mr Breakfast Cereal Families:
Additional Images

Submitter: Mr Breakfast
Uploaded: 3/17/2008
Additional details
Upload an image for this cereal
Comments About This Cereal
What do you think of The Batman?
There are no comments yet for this cereal. Be the first! Was it good? Was it bad?
Do you have information not included in the article? Let the world know!