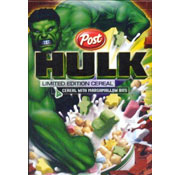 
Hulk was a limited-edition cereal from Post in 2003. It was a promotional tie-in for the film "Hulk" released that year.

The cereal pieces resembled (and were said to taste similar to) Corn Pops cereal. The flavor has also been compared to Alpha-Bits and Lucky Charms.

The marshmallows came in the shapes of a laboratory beaker, a red brick, an explosion which looked like a yellow star and the Hulk which looked more like a green snow angel.

The movie was directed by Ang "Brokeback Mountain" Lee. It stared Eric Bana as Bruce Banner, the Hulk's alter-ego. Jennifer Connelly, Sam Elliot and Nick Nolte appeared in supporting roles. Lou Ferrigno, who played the Incredible Hulk in the TV series from 1978 to 1982, appeared in a cameo role as a security guard.

Text on the side of the cereal box gave a rough description of the movie's plot:

Bruce Banner endures a life without a past, yet filled with dreams. As a genetic scientist, Bruce studies the effects of gamma radiation on damaged tissue. Unaware that there is a monster inside him, Bruce continually struggles with fits of anxiety and rage.

One day during a freak lab accident, Bruce's inner beast is unleashed... and he becomes the most powerful being on the face of the earth.

The back of the box featured still images from the film and a Hulk Trivia quiz. 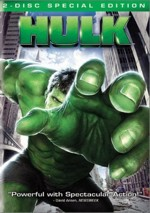 Submitter: DeeJay
Uploaded: 7/1/2008
Additional details
Upload an image for this cereal
Comments About This Cereal
What do you think of Hulk?

This cereal was okay. It tasted and looked like Lucky Charms to me. I wish they would have done a second Hulk Cereal for the second (and better) Hulk movie of 2008. Since the movie was better, maybe the cereal would have been too.

Hulk is so strong so what if the cereal makes you that strong. Ha ha.