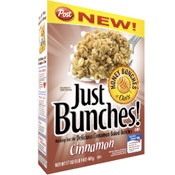 
The back of the box described this cereal as follows:

"Another reason to love Honey Bunches of Oats... It's an entire box of nothing but tasty, crunchy Cinnamon-Baked Bunches. We just removed the flakes, but none of the great taste!"

The box also urges consumers to mix the cereal "into your fat free or low fat yogurt, ice cream or even another one of your favorite cereals."

Just Bunches! - Cinnamon Cereal has been reviewed on MrBreakfast.com. 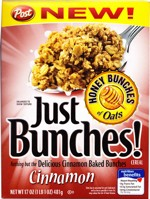 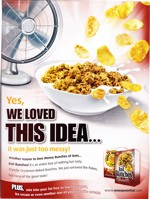 Submitter: Mr Breakfast
Uploaded: 2/3/2010
Additional details
Upload an image for this cereal
Comments About This Cereal
What do you think of Just Bunches! - Cinnamon?

I just searched and searched for my favorite cereal and have found the dreaded words from Post: "Discontinued". I don't know when this happened but the last batches of cereal I got had sell by dates in March 2012 or maybe May 2012. Whatever. I guess just over 10 years was all they could do. But with only one flavor in the "group" while Post's line called Honey Bunches of Oats has at least 12 to 15 (or 20) flavors, from Almonds to Chocolate to Cinnamon. I don't see how any of them could get more than 3 beans in a vote and that is being real charitable. But I'm sure they sell and make more of a profit since it is just a box of flakes.

I have gone to three different grocery stores to find another box of this fabulous, wonderful and superb tasting cereal. I wish I could remember where I got my first box, for I would happily get another and another.