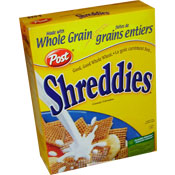 
Primarily available in the U.K., Canada and other non-U.S. markets, this is a Wheat Chex-style cereal with interwoven strands that create "100% whole wheat" squares with a checkered pattern.

The cereal was original produced by Nabisco and later Post after an exchange of company ownership. Shreddies were produced by Nestle in the U.K.

The cereal changed it's name in 2008 to Diamond Shreddies. It was the same exact cereal, except the square pieces were photographed standing on edge so the squares appeared diamond-shaped.

Upload an image for this cereal
Comments About This Cereal
What do you think of Shreddies (Post)?

When we come to the USA for extended stays we always pack 2 or 3 boxes of Shreddies to bring down. An absolute favourite with no equal.

It's ridiculous you can't get these cereals in the USA! I have had them my whole life living in UK and other European and Asian countries. I moved to USA and can't find them in the supermarkets. I have to order them online or visit an international store like Jungle Jim's.

Discovered Shreddies in the UK. Why oh why can't I get it in the US. My family and I LOVE this stuff. Thought maybe Life cereal was a lot like it, not even close. I would be a big consumer of Shreddies if I could get some.

Absolutely LOVE my Shreddies, and so disappointed that they're not available in the US. Friends and family are shipping them to me from Canada. This cereal needs to be sold in the US.

Shreddies are the best cereal ever. I pay to have them shipped from the UK. They are amazing and so good for you. I am a Shreddies Lover until the end.

I lived on these for many many years (for breakfast, I mean). I had them as a kid but they became a breakfast staple later on as an adult. I still occasionally treat myself to a box now and then, when I can hit the local Costco and grab a few of the double sized boxes. They're getting rather pricey, though, as are most cereals.

Shreddies need to be sold in the USA!! Much better than the sugary cereals we have here!!

Shreddies are even better than Chex, in my humble opinion. The squares have a pretty tight weave and still taste great when saturated with milk.