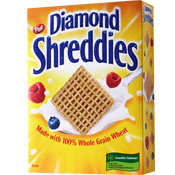 
This cereal has a funny story. Primarily available in the U.K. and non-U.S. markets, this cereal was originally called simply Shreddies. It was basically Post's version of Wheat Chex - square cereal pieces with interwoven strands that create a checkered pattern.

In a bold marketing move, the company began taking pictures of the square cereal pieces with the corner of the pieces facing the bottom of the photo composition. This effectively made the square shape appear as a diamond shape... thus... Diamond Shreddies. The ad campaign surrounding this change won a Clio (advertising) award in 2008.

Here's a sample advertisement for Diamond Shreddies from that period:

"The Diamond Shreddies Generation... They appreciate a bit of edgy design. Even in their breakfast bowl. But that doesn't mean style over substance. No siree, they still want that 100% whole grain wheat taste Shreddies cereal is known for, the taste they grew up with. Style and substance, that's why Diamond Shreddies is the cereal of choice for the new generation."

Upload an image for this cereal
Comments About This Cereal
What do you think of Diamond Shreddies?

Makes me think of Triscut... wonder how it tastes.