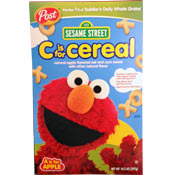 
I've nicknamed this cereal Sesame Street Cereal (or Elmo Cereal) so it doesn't look like a mistake in our database of cereals that start with C. The actual name of the product is C Is For Cereal. The front and back of the box both prominently feature the Sesame Street character Elmo.

The front of the box describes the cereal as a "natural apple flavored oat and corn cereal with other natural flavors." To emphasize the flavor, the cereal seems to be subtitled "A Is For Apple". So ostensibly, the name of the cereal could be considered Post's Sesame Street C Is For Cereal A Is For Apple cereal.

Additional text on the box indicates that this cereal "contains nutrients that help support healthy brain development, (that is has) 22g Whole Grain per 27g serving, (and that it is) ideal food for little ones!"

Upon the cereal's introduction, the back of the box featured a game called "Words with Elmo! Help Elmo read the words that go along with the pictures." 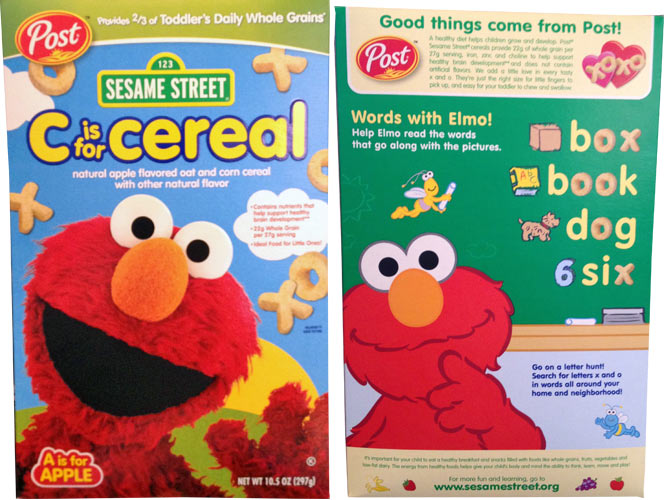 Another variety of this cereal was introduced at the same time called Cookie Monster Banana. That cereal featured Sesame Street's Cookie Monster on the front of the box.

Sesame Street Cereal has been reviewed on MrBreakfast.com.

Click here to read the review.
This cereal belongs to the following Mr Breakfast Cereal Families:
Upload an image for this cereal
Comments About This Cereal
What do you think of Sesame Street?

This is one of the strangest cereals I've ever tasted. It has a vaguely granny smith apple-y flavor, but it's not sweet at all (which plays bizarro mouth-brain tricks since apples are inherently sweet). It's addictive, though. I love it with goat milk.