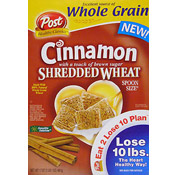 
The complete name of this cereal was Cinnamon With A Touch Of Brown Sugar Shredded Wheat Spoon Size." The box indicated that it was an "excellent source of whole grain." This cereal has been discontinued.

Upload an image for this cereal
Comments About This Cereal
What do you think of Cinnamon Shredded Wheat?

Love Cinnamon Shredded Wheat! So sad I can't buy it anywhere. Such a shame. You should definitely try it again. One taste and you're hooked.

I bought his once. Couldn't find it anywhere after that. I'm still craving it! Please, please bring it back, especially to San Ramon, CA.

Like so many others, I love this cereal. Discontinuing it was a mistake. Please reconsider and bring it back everywhere, but especially to Seymour, Indiana.

I tend to dislike healthy cereals but this was amazing. Please bring back to Nashville, TN.

Where can I find this cereal, it's the best I ever had and I cannot find it anywhere. cinnamon shredded wheat!!!!!!!

PLEASE bring Cinnamon Shredded Wheat back to Montana (at least Helena!!) It's the best we've ever had!!

I LOVE this cereal! However, it's not in any of the stores I shop in now and I MISS IT!! It's loaded with flavor and has all the goodness of whole grains!! PLEASE BRING IT BACK TO AKRON, OH!!