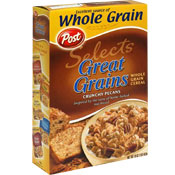 The first 3 ingredients listed on the side panel are whole wheat, pecans and rolled oats.

Upload an image for this cereal
Comments About This Cereal
What do you think of Great Grains - Crunchy Pecans?

Great Grains were FORMERLY my family's favorite cereals. Post what did you do? All the flavors now are HORRIBLE. They taste like artificial flavors and have bad textures.

Post wrecked what had been my FAVORITE cereal. Those puffed up white pieces of junk are hideous tasting! I wouldn't have cared if they had raised the price instead. Here's a hint for Post and every manufacturer out there: IF IT AIN'T BROKE, DON'T FIX IT! Duh!

When I first discovered this cereal, it was GREAT, but expensive, so I stopped buying it. Then when I looked for it again, I found they had changed the design of the package and it was hard to find. I decided to splurge and buy it but it had changed. Oh, how I wish someone would make that GREAT cereal again!

This is the first time I have purchased Great Grains Crunchy Pecans cereal (4/9/2016). My wife and I both had a bowl of the cereal with whole milk and it tasted awful. This cereal is bland with what I would call a chewed wood / paper taste. It's pretty bad. We paid $3.99 for a 16 ounce box at Publix and after trying these two samplings, we threw the box in the trash. We are off from trying any new Post cereal for the near future.

It use to be a great cereal. One of a few that I would eat every morning. They decided to go cheap to make more profit and change the mixture. It tastes like dry mud mush after chewing a little; even with a lot of milk. I no longer eat this cereal. They did the same to their Great Grains Blue Berry Morning. They went cheap to make more profit by making it almost all puffed rice. It tastes like Rice Krispies with little bits of dried blue berries at a higher price.

They've changed the recipe and ruined what used to be a great cereal. Post has added a bunched of puffed I-don't-know-whats that make it taste like a cheap kids' cereal. Sad.

The only cereal I eat. Buy 10 boxes at a time from Walmart. Can usually find it on sale for 2.50 a box. Try to add blueberries when in season.

This is the only cereal I eat. Finally, a great cereal without raisins or dates, just pecans and the flavor is fantastic. Thank you for making this, now if I could just find some coupons for this it would even be better.

No dates? No raisins? What happened?