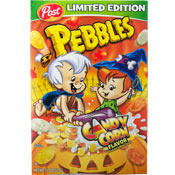 
This limited edition cereal features traditional Pebbles cereal pieces colored orange, yellow and white with "candy corn flavor". The box features the Flintstones characters Pebbles (in a witch's hat) and Bamm-Bamm (in a cape smashing the cereal with a club).

The back of the box features a recipe for Pebbles Candy Corn Whoopie Pies. As the box alludes, these are "Halloween treats they'll scream for!"

The first 4 ingredients listed on the side panel are rice, sugar, hydrogenated vegetable oil and salt.

It's interesting to note that Kellogg's had a limited edition candy corn flavored cereal back in 2001 called Candy Corn Corn Pops. 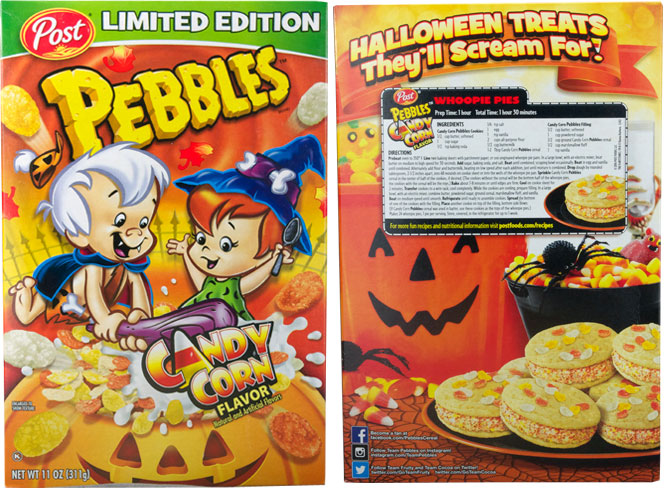 Candy Corn Pebbles is a festive looking cereal. The flavor is more of an enjoyable caramel than anything that will remind you of candy corn. That's probably for the best as candy corn tastes pretty much just like sugar with faint notes of artificial flavor. I liked this cereal better than other recent Pebbles cereals (like Cupcake Pebbles and Sugar Cookie Pebbles), but not nearly as much as the classic Cocoa Pebbles and Fruity Pebbles. I give it a 4.5 out 7. Not too bad for a novelty cereal. 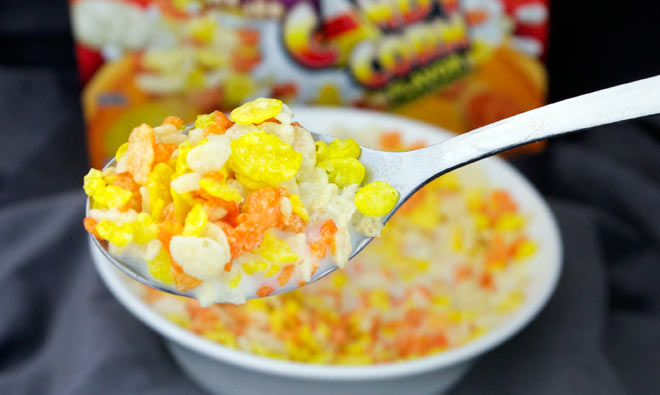 Click here to see all cereals from Post.
This cereal belongs to the following Mr Breakfast Cereal Families:
Upload an image for this cereal
Comments About This Cereal
What do you think of Candy Corn Pebbles?
There are no comments yet for this cereal. Be the first! Was it good? Was it bad?
Do you have information not included in the article? Let the world know!