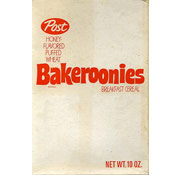 
This "Honey-Flavored Puffed Wheat Breakfast Cereal" never made it out of the development phase. It may have been tested in select markets, but we have no verification at this time.

Upload an image for this cereal
Comments About This Cereal
What do you think of Bakeroonies?
By Gr8pNutZ

Considering the annual cereal intake levels of your average burn-out, "Bakeroonies" has tons of potential. "...Who cares what it tastes like, IT'S CALLED BAKEROONIES!!!" Man, I could go for some bakeroonies or some huskies or Elija's Manna right about now. Go team Post!

Now I know why this cereal failed.... because it was the exact same thing as (Super) Sugar Crisp.