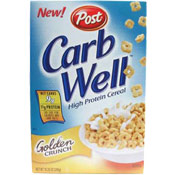 
This cereal described itself on the box as a "high protein cereal" which provided 11 grams of protein per serving and only 9 grams of carbs. The cereal pieces were shaped somewhat like square Cheerios pieces (with a hole in the middle of each piece). Another version of this cereal called Cinnamon Crunch Carb Well was introduced at the same time (2005) as this Golden Crunch variety.

Carb Well - Golden Crunch Cereal has been reviewed on MrBreakfast.com.

Submitter: Mr Breakfast
Uploaded: 3/22/2008
Additional details
Upload an image for this cereal
Comments About This Cereal
What do you think of Carb Well - Golden Crunch?
There are no comments yet for this cereal. Be the first! Was it good? Was it bad?
Do you have information not included in the article? Let the world know!