U Cereals
17 cereals start with the letter "U" 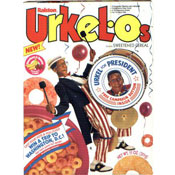 Featured "U" Cereal:
Urkel-Os
From Ralston; Introduced in 1991
Urlelo-O's was based a character from the television sitcom Family Matters which aired on ABC from 1989 to 1997 and CBS in 1997 and 1998). The character Steve Urkel was a stereotypical nerd with a squeaky voice, thick glasses and high-rising pants... Read More

Other Featured "U" Cereals:

More Cereals That Start with "U"