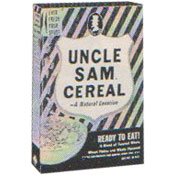 From: Uncle Sam Cereal
Introduced in 1907

Coltrin, then age 76, was told by doctors he had only 6 months to live. The diagnosis: acute abdominal ulcers aggravated by chronic constipation. The doctors prescribed flaxseed oil to ease his constipation.

The ailing man took the doctor's recommendation but hated the taste of flaxseed oil, so he took what he thought were his last days on earth to create a cereal that would make flaxseeds more bearable.

The result of his trials was wheat flakes sprinkled with Flaxseed and celery powder. Not only did the cereal taste fine, it also eased his constipation more than flaxseed alone. He called the new product Uncle Sam Breakfast Food - named so because Coltrin resembled the character Uncle Sam (so much that his pals called him Sam).

Coltrin sold his cereal to John McGowan who began to market the cereal throughout the U.S., laying the groundwork for The Uncle Sam Breakfast Food Company.

An ad placed in the 1915 Bulletin of the Medical and Chirurgical Faculty of Maryland described the cereal this way:

When flaxseed is added to the wheat as in Uncle Sam Breakfast food, we have together the nutritious proteins of the wheat, which are the lumber out of which tissue is constructed, and the natural cathartic principle of the flax which removes the putrefying intestinal contents. The basis upon which this food was originated will be at once appreciated by the medical profession.

...A pinch of ground celery and pure salt add to its appetizing effect. It has the nut-like taste of rich brown toast."

Note from Mr Breakfast:
We've been unable to track down an image of the original packaging for this cereal. The picture shown above is what the cereal eventually became, Uncle Sam Cereal. If you have, or know of, an picture of Uncle Sam Breakfast Food, please post a note in the comment section below. Thanks!


Click here to see all cereals from Uncle Sam Cereal. 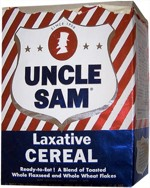 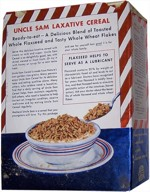 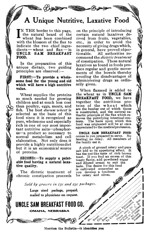 Submitter: Mr Breakfast
Uploaded: 9/30/2008
Additional details
Upload an image for this cereal
Comments About This Cereal
What do you think of Uncle Sam Breakfast Food?

I discovered this cereal a few years ago and I love it. I combine 3/4 cup of it with 1/2 cup of Kashi Berry Clusters cereal. No additional sugar required.

As a teenager, whenever I saw Uncle Sam at the store I found it amusing that the cereal boasted its laxative quality right on the box front under the brand. I never thought I'd ever eat it. About 10 years ago, I saw a recipe for fried chicken that included this cereal and I got curious. I found it on sale and I tried it. I immediately went back to the store and bought about 7 boxes (the sale price was really good). Uncle Sam has been a staple food for me since then. Laxative, schmackxative, I just like the flavor and texture. It is also quite filling and sustaining. Fortunately, Trader Joe's carries it at a reasonable price.

This is my favorite cereal. Not sweet, with a good nutty flavor and an insane amount of fiber, which is great!

Really good and filling. I sweeten it with Stevia. Very low sugar which is important to me.

I buy this cereal all the time. Walmart and Publix carry it.

Good, especially when sweetened with honey.