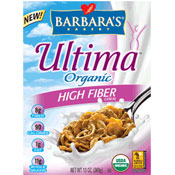 It was described in press materials as having "whole oats and wheat, 8 grams of fiber and just 90 calories per serving!"

In 2009, the company introduced another variety of the cereal: Ultima Blueberry & Blue Corn.

Upload an image for this cereal
Comments About This Cereal
What do you think of Ultima - High Fiber?
There are no comments yet for this cereal. Be the first! Was it good? Was it bad?
Do you have information not included in the article? Let the world know!