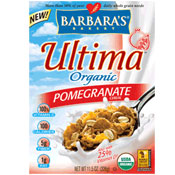 This cereal was introduced in press materials as "a zingy pomegranate blast... with whole grain goodness and antioxidant benefits in the form of 100% Vitamin C per serving."

In 2009, the company introduced another variety of the cereal: Ultima Blueberry & Blue Corn.

Upload an image for this cereal
Comments About This Cereal
What do you think of Ultima - Pomegranate?
There are no comments yet for this cereal. Be the first! Was it good? Was it bad?
Do you have information not included in the article? Let the world know!