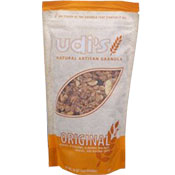 
This description of Udi's Original Granola is from a company press release dated November 22, 2006:

Udi's Original granola recipe is based on a family recipe from the grandmother of Yasmin Losada-Hissom, pastry chef and partner in Udi's Granola. The granola starts with extra-thick-cut rolled oats that are hand mixed with Colorado honey (from the Colorado Honey Company, a fourth-generation family of beekeepers based in Fort Collins, Colorado). The oats are slow toasted, then mixed with four kids of nuts, raisins and dried banana slices.

Upload an image for this cereal
Comments About This Cereal
What do you think of Udi's Original Granola?
There are no comments yet for this cereal. Be the first! Was it good? Was it bad?
Do you have information not included in the article? Let the world know!