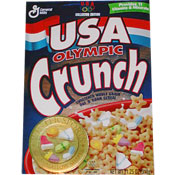 From: General Mills
Introduced in 1998


This very-limited-edition cereal was a tie-in with the 1998 Winter Olympics in Nagano, Japan. It was a star-shaped, sweetened whole-grain oat and corn cereal with marshmallows in the shape of winter sports equipment (hockey sticks, snowboards, etc) in patriotic red, white and blue packaging.

Two years early for the 1996 Summer Olympics in Atlanta, GA, General Mills introduced Team USA Cheerio which was transformed into Team Cheerios in 1997. 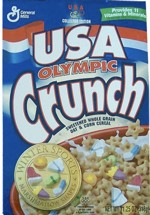 Submitter: Blessed
Uploaded: 3/25/2010
Additional details
Upload an image for this cereal
Comments About This Cereal
What do you think of USA Olympic Crunch?
By Sheila

I found this box of USA Olympic Crunch from 1998 unopened... I'm sure my wife had intended for our grandchildren to have when they came to visit... It was pushed way back in the back of the cabinet... The box is in perfect condition. I didn't know if would be of any interest to General Mills or not! If so you can reach me @ 575-496-4490 Jay Holland