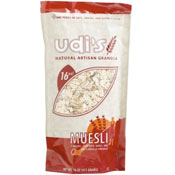 
According to the front of the package, this cereal had "5 grains, flax seed, dates and Udi's Vanilla Granola." The top of the package called its contents "one pound of oats, grains and alpine flavor."

The five grains alluded to were oats, barely, wheat, triticale and rye.

This product appears to have been discontinued. It no longer appears on the Udi's website.

Upload an image for this cereal
Comments About This Cereal
What do you think of Udi's Muesli?