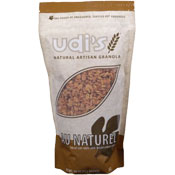 From: Udi's Handcrafted Foods
Introduced in 2006


When this granola was announced in January of 2006, it was referred to as Naked granola.

The following text is from a January 2, 2006 press release:

(Our) new flavor, Naked, is Udi's slow-baked oats with no nuts or fruits added. "Some of our customers," Clayman (managing partner of Udi's Granola) says, "want to mix our toasted oats with their own blend of fruits and nuts.

By November of that same year, the name had been changed to Au Naturel.

Au Naturel is Udi's slow-baked oats with no nuts or fruits added.

Upload an image for this cereal
Comments About This Cereal
What do you think of Udi's Au Naturel Granola?

It is one of the few Brands that has GOOD wheat-Free Granola cereal.