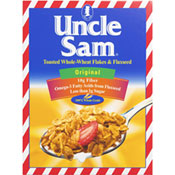 From: Uncle Sam Cereal
Introduced in 1908


"Over Half a Century... a Regularity Favorite."

The cereal was originally called Uncle Sam Breakfast Food and it dates back to 1907. 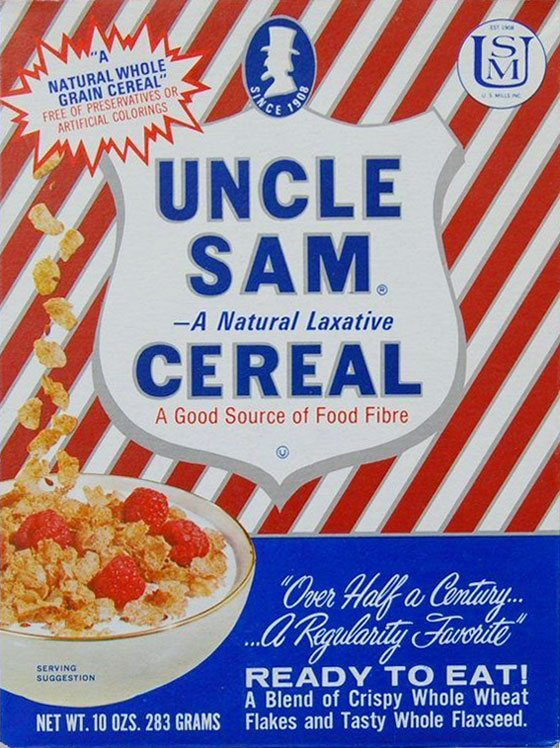 In the 1920's, The Uncle Sam Breakfast Food Company created the first cereal targeted to kids, Vanilla Sweeties... Read on and see all cereals from Uncle Sam Cereal 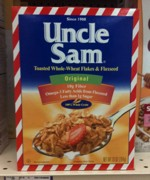 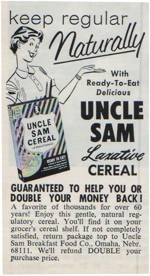 Submitter: Mr Breakfast
Uploaded: 9/30/2008
Additional details
Upload an image for this cereal
Comments About This Cereal
What do you think of Uncle Sam?

In case you're wondering, it no longer contains celery salt, which just sounds weird. Whole wheat kernels, whole flaxseed, salt, barley malt. No added sugar. Note that it does have added salt, but just a touch (135 mg per serving, 7% of daily recommendation). It's my favorite, both taste-wise and nutritionally; I add dried cherries and/or sliced banana, or fresh berries.

This cereal is great. I like to mix with Kashi 7 grains and sesame.

Great taste. Just add truvia - 1 packet - and fruit and skim milk. It has the highest fiber that I have found. Price is good also.

LOVE it! I'm 60 years old and just found this cereal. Today, I mixed it half and half with my quick oatmeal - cooked it up and seasoned it with molasses and cinnamon. YUM Want to try it in my next homemade yeast bread. To be continued...

Uncle Sam cereal is very good. It's simple. That's why the comments here are mixed. If you love sugar-crammed cereals, you probably will not like this one.

Sickening. I ate it only because I hear it's good for you. But seriously, it is plain nasty tasting.

This cereal is not so much for taste but for health. My father brought my attention to it in my late teenage years and pointed out the importance of flax seeds (which it contains) for health. It used to be only at a few Kroger stores in the Cincinnati area. I've seen it around in recent years - still in Kroger stores in town.

There is a new flavor with strawberries. It is good also.

Nasty stuff, I threw it out.