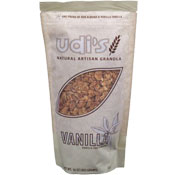 From: Udi's Handcrafted Foods
Introduced in 2006


Depending on how you read the package, the complete name of this cereal could be interpreted as Udi's Vanilla Natural Artisan Granola (with) Vanilla And Almonds. The top of the package describes the cereal as "our almond & vanilla thrilla" and text at the bottom indicates that it's wheat-free.

Udi's website (in 2011) described this cereal as "the warm, buttery flavor of vanilla blended perfectly with toasted almonds."

Upload an image for this cereal
Comments About This Cereal
What do you think of Udi's Vanilla Granola?
There are no comments yet for this cereal. Be the first! Was it good? Was it bad?
Do you have information not included in the article? Let the world know!