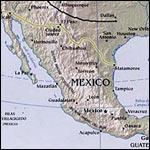 Go Directly To The Recipes

In Mexico, breakfast is called "el desayuno" and brunch is ordered as "almuerzo". Roughly translated, those words mean "super-hardy meals filled with color, spice and flavor that match the character of the people who live in Mexico".

Throughout the Republic of Mexico, breakfasts vary by region due to the produce available, ethnic diversity and proximity to neighboring countries. Similarities in regional cuisine stem from Native American traditions (primarily Aztec and Mayan) and the influence of three centuries of Spanish rule.

Often called the "Bread of Mexico," the tortilla is the defining element of a Mexican breakfast. Just like people in other countries might put eggs (and bacon!) on toast to create a makeshift breakfast sandwich, the people of Mexico are always eating some rendition of a breakfast burrito, taco or tostada.

Always unleavened and usually made from corn (maize) flour, tortillas date back 10,000 years before Christ. Around the year 1500, Spanish conquistadores coined the name "tortilla" which means "small and flattened."

If one were forced to encapsulate the nature of Mexican breakfasts in a word, that word would be "spicy and colorful".

A lot of people think Jennifer Lopez is from Mexico. But the fact is that Lopez was born in New York by parents of Puerto Rican decent. The reason people mistakenly believe she is Mexican is because she's spicy and colorful, much like the people of Mexico, or more importantly, much like the breakfasts of Mexico.

The Chile pepper is the vegetable of distinction in Mexican cooking. Liberal uses of hot peppers contribute to spicy regional sausages (like chorizo) and spicy egg dishes like huevos rancheros (fried eggs on a tortilla topped with spicy tomato sauce). The Chile pepper has become so synonymous with Mexican cuisine that its inclusion in non-Mexican dishes instantly adds "Mexican-style" as a prefix. 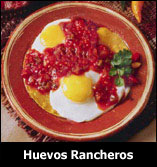 Most restaurants in Mexico have hot sauce or salsa on the table. So even, if your breakfast doesn't have a spicy characteristic, you can easily add it.

As for color, let's take a mental trip. We're passing though the state of Chiapas in southeast Mexico. We pass homes and huts painted in vibrant hues... green... red... there's a yellow one. Large murals are painted on the sides of many state buildings.

Our mental bus stops for a moment and women in brightly embroidered huipil (blouses) and colorful hand-woven skirts approach our windows (ancient Mayans wore colorful clothes to protect themselves from the evil spirits). They hold up a rainbow of fresh produce for us to buy. Without question, Mexico is a country of color and that is displayed in no better place than their breakfast.

It's fruits and vegetables that make Mexican breakfasts a feast for the eyes as well as the mouth: red and green peppers, yellow and green bananas, yellow and red tomatoes, forest green cilantro, oranges (self-explanatory) and golden pineapples.

Other fruits you might enjoy in Mexico include: mangos, papaya, watermelon, guava, lima ("lime" to you and me) and strawberries.

Brown may not be a part of an atmospheric optical rainbow, but it's a very important color in the culinary rainbow of Mexican breakfasts.

Years ago, a common ethnic slur was to call Mexicans "beaners". Today, the term is kept alive as a racial epitaph by Mexican Comedians like Carlos Mencia, but to breakfast lovers, the description "beaners" is a sign of great respect. Mexicans eat a lot of beans (Frijoles) and they do them right.

Refried beans are basically beans for beginners when it comes to Mexican cooking. Other favorites are beans cooked in a Chile broth and beans slow-cooked with garlic and onions. White beans and pinto beans are popular in northern Mexico. Black beans become more popular the further south you travel. Thanks to the prominence of beans in Mexican cooking, most people eating a Mexican-Style breakfast in the United States now get to enjoy beans in the morning. In essence, this makes us all "beaners" - proving once again that breakfast has the ability to combat racism. In Mexico, even fast food restaurants like Burger King serve refried beans.

If indeed Mexican breakfasts are a reflection of the Mexican people, chocolate would represent their sweet and playful nature. Mexicans love chocolate. That might sound like an overly sweeping generalization, but consider this: ancient Aztecs considered chocolate so valuable that they used it as currency. While you're thinking about that, think about this:

Mexican chocolate is a bit different from most chocolate found in the United States. It's made from dark, bitter chocolate and is usually mixed with sugar and cinnamon. The average gringo (foreigner to Mexico) would consider Mexican chocolate more grainy and sugary than they're used to.

At breakfast, Mexicans enjoy chocolate as their ancient ancestors did... as a beverage. Discs of Mexican chocolate are melted in water or milk and mixed with a variety of ingredients to create drinks too complex to simply be called "hot chocolate".

For a special Mexican chocolate breakfast treat, you might try dipping pan de yema - a sweet, soft bread made with lots of egg yolk - into a bowl of thick steaming cinnamon-infused Mexican chocolate.

Chocolate may be the basis for the most distinctively Mexican breakfast drinks, but coffee remains the country's most popular morning beverage.

In Mexico, coffee is called "café". The average quality of their coffee is a bit closer to what we would consider gourmet coffee in the U.S. While it's typically light bodied and nutty, it can have a heavier body, brighter acidity and overtones of chocolate. At first gulp, it might taste somewhat burnt, but that impression fades the more you drink.

Here's a quick guide for ordering coffee and a few other beverages in Mexico:

When we read about breakfast in other lands, we always hope the next paragraph will mention something exotic and weird.

Iguanas, rattlesnakes, deer, spider monkeys and grasshoppers may have been part of ancient Aztec and Mayan cooking, but they're hard to come by these days. The strangest thing you're bound to encounter traveling through Mexico is the great amount of Coca-Cola that's served with breakfast.

You might be surprised to find really great French rolls in Mexico. "French bakery products in Mexico?!" From 1862 to 1867, much of Mexico was under French control. There was a national debt issue and a brew-ha-ha with England and Spain. Long story short, the French were driven out and they left behind some pretty great bread. Crusty rolls called bolillos (pronounced boh-lee-yohz) are the most prominent. They're especially good ripped into pieces and dipped into café con leche.


Lucky for us, the Mexicans regained their independence. Today, their breakfasts remain a tribute to their ancient Indian past... add a handful of local color... a cup of Spanish flare... a tablespoon of traditional spice and just a pinch of influence from invading Frenchmen and... Comer con gusto... el Desayuno! (Enjoy your breakfast!) 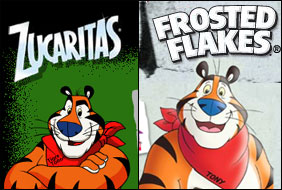 In Mexico, Frosted Flakes are known as Zucaritas, which translates to "little sugary ones". Tony the Tiger goes by the name El tigre Tońo and he looks just a little tougher than he does in the U.S.. Interestingly, a bowl of Snap, Crackle and Pop makes the sound "Pim! Pum! Pam!" in Mexico. Seriously. 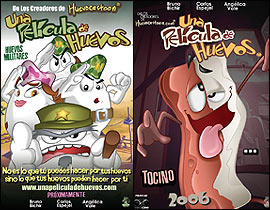 In April 2006, an animated film called "Una Pelicula de Huevos" ("A Very Eggy Film") grossed nearly $2.7 million in its opening weekend. The film follows the adventures of Toto, Willy, and Bibi, talking eggs living in a world of humans. The film also features a walking, talking strip of bacon. The movie is based on a very successful Mexican humor website called Huevocartoon.com. You can see the trailer at the film's website, unapeliculadehuevos.com.