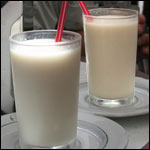 Note From Mr Breakfast:
A terrific breakfast lover named Morgan wrote in regarding this recipe saying, "Horchata is usually made with rice in a blender. It is much better that way, although a little more time consuming to make." Thanks for the note Morgan!

In a large pot, mix all ingredients together all ingredients. Let this stand for at least three hours. Cook on the stove at a low simmer for 1/2 hour stirring occasionally.

Puree in a blender and strain through a cloth.

A wildly popular drink in Spain and Mexico. It should turn out a bit thick, yes.

Mr Breakfast would like to thank berdwin for this recipe.


Comments About This Recipe
What do you think of Horchata?
Overall Average Rating = 4 (out of 5)
Based on 6 votes.

I'm Puerto Rican but this recipe is all wrong... you use old rice water, get coffee filters and strain the water through it into a pot or bowl or whatever you choose, then get fresh cinnamon sticks and let them soak in the water over night. This is how my friend's mother makes it. There's no milk in horchata.

From Elvira
Have either of you... original or first comment... ever had HORCHATA? It is made from uncooked rice, and is a delicious drink. Please go and look at the earlier recipes, from Mexicans... they know how!!

Neither of those are close to the real horchata recipe. You should call it something different.

From Summerly
Made with water only, no mild and it is awesome best ever.

From Lifesaver
OMG. Thank you. U saved my life. I didn't have any more poder and u really helped me out. Thanks a million.

From Latin Chick
The original is way better more natural, plus my parents make this too and rice milk is the original recipe.

I would use rice milk, as opposed to regular milk, seeing how the recipe originally used blended rice.