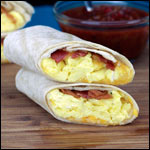 (3 servings)    Printable Version
Is a breakfast tortilla wrap the same thing as a breakfast burrito? Pretty much, but not exactly. In a burrito, the tortilla is folded over the filling one time. In a wrap, the side-edges of the tortilla are folded in and then the tortilla is rolled over the ingredients. The difference is far more noticeable when there's less filling. But that's not how I "roll". I like as much egg, bacon and cheese as I can possibly fit.

This recipe was submitted by "caroline" back in 2002. It took me a while to try it (November 2012), but I'm glad to report that her recipe is a complete success. I didn't change a thing. What you see in the pictures is her exact recipe. If you're looking for a very basic, no-frills breakfast burrito kind of thing, this is easy to make and it tasted fantastic. 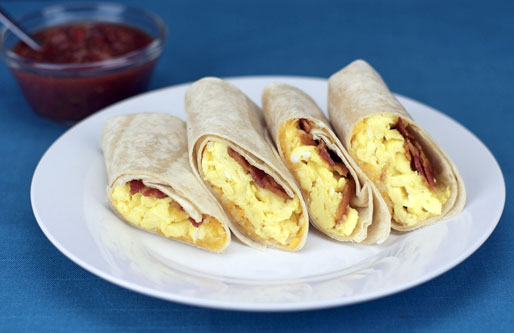 How To Make Breakfast Tortilla Wraps


In a large pan over medium-high heat, fry the bacon until browned and completely cooked. Transfer to stacked paper towels to remove any excess grease and to crisp as it sets.

In a mixing bowl, beat the eggs with the milk and a couple pinches of salt and pepper.

Scramble the eggs in melted butter in a frying pan over medium-high heat. (You could use the same pan that you fried the bacon in - just retain a Tablespoon of the bacon dripping and don't add the butter or margarine.)

On each tortilla, sprinkle 2 Tablespoons of shredded cheese. Cover with 1/3 of the scrambled eggs. Top with 1 or 2 slices of bacon. Fold the tortillas envelope-style or roll it up like a wrap. Let them set 1 minute so the cheese melts. Eat and enjoy! 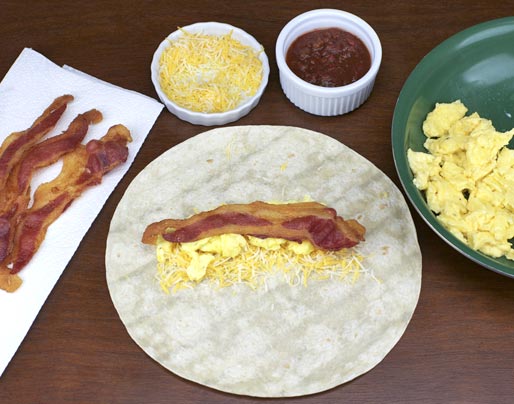 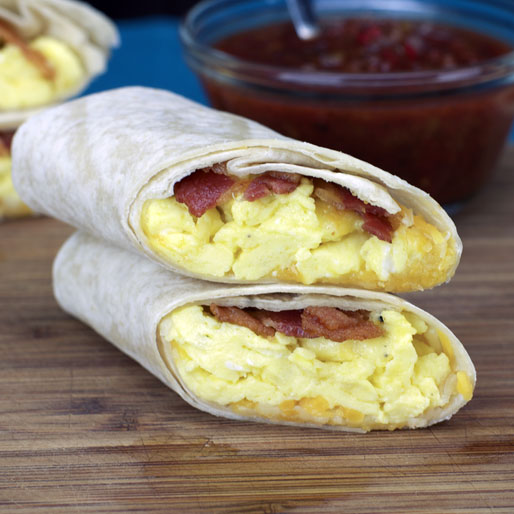 I put out the ingredients (tortillas, scrambled eggs, bacon and cheese) and let each person roll or fold their own wrap or burrito. Fun for a buffet-type breakfast.


Comments About This Recipe
What do you think of Breakfast Tortilla Wrap?
Overall Average Rating = 5 (out of 5)
Based on 8 votes.

From franciosi
Thought it was delicious.

From H. Brophy
Very nice. I give it two thumbs up and a smiley face!

From Lorise2 (Team Breakfast Member)
Tried this and loved it. Everyone did their own.

From Saysmar
I used two more eggs and a whole cup of cheese to make 4 wraps. They were very good. I froze two of them and reheated them two days later - microwaved them for 3 minutes at 75% power and they were just as good.

From Nicesmellingguy
This can also be made with green, red, yellow peppers and onions.

From MightyNugget
Yum! Amount of bacon was perfect. Needed 1 more tablespoon shredded cheese per wrap though. I'd like to make it again and also add hash browns.

@Can I. - I found that these were fine warmed up in the microwave the next day. The bacon wasn't as crispy, but it was definitely better than any microwave breakfast burritos I've tried from the grocery store.

Breakfast wrap? Burrito, taco, taquito would be acceptable. How about salsa?

If I would make this ahead of time can I microwave to warm up?

Cooked pan sausage can be used in place of bacon. Place tortilla wrapped breakfast in casserole dish. Pour can of enchilada sauce over and sprinkle with cheese. Pop in the oven until cheese melts. Great to take to brunches.