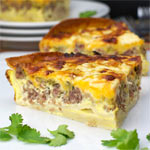 (4 servings)    Printable Version
This quiche was really good. The only near-complaint I have is that it may have had too much sausage. That probably sounds insane to most meat lovers, but the balance of egg and cheese to meat would have been better with 3/4 pound of sausage. Be careful if using spicy sausage and hot green chilies. I used mild versions of both, but still found the quiche a bit on the spicy side. More than anything, I liked how the corn tortillas formed a delicious crust with no effort required. That's a good thing to keep in mind for all quiche dishes. If a recipe doesn't have a crust or the crust sounds too complex, just lay down a couple of corn tortilla. So easy! (This recipe was submitted in 2002. It was tested and photographed in March 2014.) 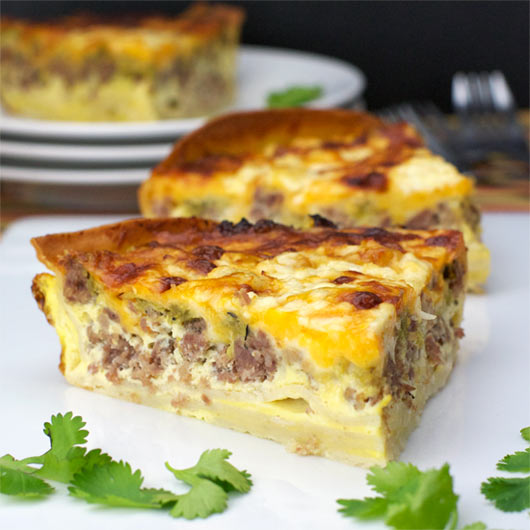 How To Make A Corn Tortilla Quiche

Spray pie plate with cooking spray. Arrange 4 tortillas in the bottom so they overlap and extend about 1/2 inch over edge of pie plate. Lay fifth tortilla over the middle.

Brown the sausage and drain it really well. Place sausage, green chilies and shredded cheeses on top of tortilla crust. In a bowl, mix eggs, cream, cottage cheese. Season with chili powder if you'd like. Pour the egg mixture slowly over ingredients in crust.

Bake at 375 degrees F for 45 minutes until golden brown and puffy. Cut into wedges and serve. 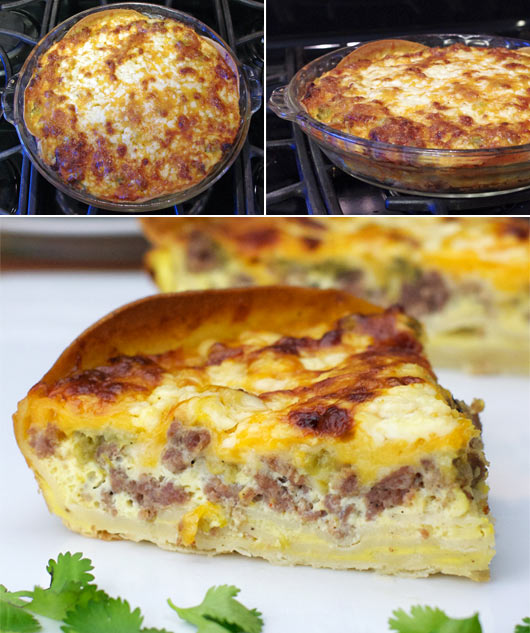 A Southwestern breakfast quiche where corn tortillas become the crust. Flavored with sausage, 2 kinds of cheese and spicy chilies.


Comments About This Recipe
What do you think of Corn Tortilla Quiche?
Overall Average Rating = 5 (out of 5)
Based on 5 votes.

From TexMex
AWESOME recipe. I use 3 tbs of the green chili & tomatoes (Rotel or generic) and most of the juice; also add chopped onions. Huge demand for recipe.

From gifford (Team Breakfast Member)
The tortillas made a great simple crust. This is a cool idea.

From Alan+Ellen
We loved it. A little too spicy. Next time - less peppers. Otherwise, very good.

I've made this recipe several times and it's always a big hit. I cut down the tomatoes for the kiddos. GREAT!

From Roger
I finally tried this after having the recipe printed out for two month. Very glad I did. The tortilla added a really nice texture and taste. Will certainly make it again.

Fine by me. Go for it Gir. Let us all know what he thinks.

From Gir
I think that my husband would like this a lot so I am going to make it for him ok?