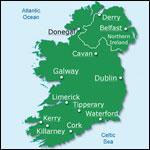 In the eyes of many food lovers, Ireland is the big island of breakfast. Their breakfasts are often big, bold and (this should keep you reading)... bloody.

The most identifiable breakfast tradition on the Emerald Isle is the Full Irish Breakfast. It's a huge platter of food consisting of rashers, bangers, black pudding, white pudding, eggs, tomatoes, mushrooms, potatoes and Irish beans. It's usually served with a regional bread such as Irish brown bread or soda bread. It might even include some boxty. 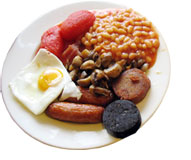 Let's break that down:

A rasher is Ireland's way of referring to a slice of bacon. Unlike the even strips of bacon found in the U.S., Irish bacon is usually round and could be thought of as a fattier version of Canadian bacon. It's often made from the back meat of a pig - in contrast to U.S. bacon made from the pork belly. The Irish tend to cook their bacon with a ham steak methodology. They consider it done when it's fully cooked through and browned. Crispy American-style bacon would be considered out of place in a traditional Irish breakfast.

Bangers are Irish sausages. They're usually made from pork or a combination of pork and beef. Most also contain some amount of rusk, a twice-baked bread product. Irish sausages are larger than traditional American breakfast sausages and smaller than German Bratwurst. The term "banger" refers to a sausage's tendency to burst or explode out if it's skin when it's grilled or fried.

Black pudding (sometimes called blood pudding) is a soft-texured sausage made from the cooked and congealed blood of pigs or cattle (and to a much lesser extent that of sheep or goats). The blood is mixed with fillers like pork, beef, fat, oatmeal, bread, potato or barley to create a familiar sausage constancy.

Irish brown bread is basically a quick rustic wheat bread made with baking soda as a leavening agent. It's made in the form of loaves, rounds or scones, or as a triangular flat bread referred to as farl. When made with white flour only, this bread is referred to as soda bread.

In Northern Ireland, a form of the Full Irish Breakfast is called an Ulster Fry, named after Ireland's northern-most providence. Traditionally, an Ulster Fry will skip the puddings and include a larger portion of mushrooms in place of a Full Irish's baked beans.

The accompanying bread will more likely be a potato bread, often a potato farl. Pancakes made from flour have also been know to appear in an Ulster Fry.

There is some debate as to what strictly defines the Ulster Fry and the Full Irish Breakfast. The collection of food items under the same name can vary slightly even at restaurants within walking distance from each other. The defining factor for many Irish seems to be this: once a given person has decided what a Full Irish Breakfast or an Ulster Fry is, he will not deviate from his definition and he will argue against any recipes that say it's something different.

For quicker, lighter breakfasts, the Irish turn to breakfast cereal. According to Kellogg's, the people of Ireland eat more breakfast cereal per person than any other country in the world. Their number one cereal choice is Kellogg's Corn Flakes. It's estimated that 360,000 bowls of the cereal are consumed in Ireland everyday.

For a quick breakfast with the feel of the Full Irish, baked beans on toast is peculiar and popular morning option. Bananas grilled with bacon is another uniquely Irish favorite - mainly in South Ireland.

Ireland is also renowned for it's Irish oatmeal. It's said that the temperate, humid climate of Ireland promotes the slow ripening of the grain which allows the oats more time to absorb the goodness of the Irish soil. Their oatmeal is usual served in steel cut form which is nuttier and less mushy than instant oatmeal (flattened steel cut oats).

Other items you might find for breakfast in Ireland include rolls, scones and other bread products, simpler egg dishes like ham and eggs, fruit, yogurt, and fish in costal regions.

The most popular beverage for breakfast is tea, with coffee not far behind. Fruit juices are also common.