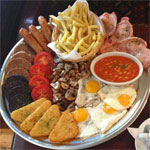 Irish sausages are usually made from pork or a combination of pork and beef. Most also contain some amount of rusk, a twice-baked bread product. Irish sausages are larger than traditional American breakfast sausages and smaller than German Bratwurst. The term banger refers to a sausage's tendency to burst or explode out if it's skin when it's grilled or fried.

In Ireland (as well as England and Australia), slices of bacon are referred to as rashers. Unlike the even strips of bacon found in the U.S., Irish bacon is usually round and could be thought of as a fattier version of Canadian bacon. It's often made from the back meat of a pig - in contrast to U.S. bacon made from the pork belly. The Irish tend to cook their bacon with a ham steak methodology. They consider it done when it's fully cooked through and browned. Crispy American-style bacon would be considered out of place in a traditional Irish breakfast.

Black pudding (sometimes called blood pudding) is a soft-texured sausage made from the cooked and congealed blood of pigs or cattle (and to a much lesser extent that of sheep or goats). The blood is mixed with fillers like pork, beef, fat, oatmeal, bread, potato or barley to create a familiar sausage constancy.

The term "Irish Butter" is fairly meaningless beyond national pride. If specified, it usually refers to a premium butter with a higher fat content which results in a richer flavor and creamier consistency. While such premium butters can be found in nearly every nation under a plethora of names, there are some that say butter produced in Ireland has a distinct flavor because the green grass of Ireland that feeds their milk-producing cows is somehow better than grass found in other parts of the world.

Dubliner cheese is an aged white Cheddar made in Carbery, Ireland. Named after the Irish city of Dublin, it has a ting of sweetness and a slightly firmer texture than the yellow-orange Cheddar cheese common in the U.S.

Irish brown bread is basically a quick rustic wheat bread made with baking soda as a leavening agent. It's made in the form of loaves, rounds or scones, or as a triangular flat bread referred to as farl. When made with white flour only, this bread is referred to as soda bread. 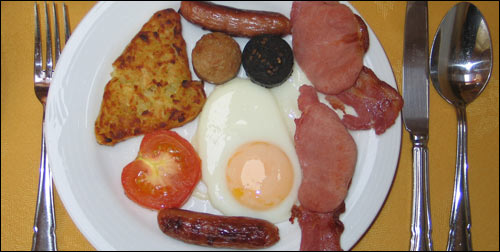 In a large frying pan over medium heat, melt about 2 Tablespoons of Irish butter.

Fry the Irish bacon until cooked through and browned - but short of crispy. Remove from pan, place on stacked paper towels to remove excess fat. Transfer to two heat-resistant serving plates. Place in oven to keep warm.

Place the Irish sausages in the frying pan and cook until done and nicely browned. Transfer to oven to keep warm.

In a small sauce pan over medium heat, warm the baked beans.

Slice the puddings to a thickness of your liking and begin frying in the frying pan. Add the potatoes. After a couple minutes, add the tomatoes. Continue to cook and flip until all ingredients are nicely browned. Transfer to the serving plates in the oven.

Finally, fry the eggs to your liking. Top with gated Dubliner cheese if desired and season to taste.

Remove plates from oven. Transfer the eggs to the plate along with a generous scoop of baked beans.

A detailed description of a traditional Irish Breakfast along with a complete recipe.


Comments About This Recipe
What do you think of Full Irish Breakfast?
Overall Average Rating = 4 (out of 5)
Based on 13 votes.

From Charro
Heat the oven 250 degrees to keep it warm?! You will get it overdone. Better 80 degrees, don't you think?

Wow, what a big heavy breakfast! No fruits, and not very healthy!

From OneHitWonder
In the US, you can only get either one sausage or one piece of bacon! Not the two together anymore. Boo hoo! No beans either. And black pudding? They never heard of it. Their bacon is like our streaky bacon not back rashers. Eggs are eggs. There is no wheat bread. They load white dough with brown sugar and corn syrup to make it brown but it sure ain't soda bread or wheat ! Tea.... gotta stop or I'll be in tears. I miss food from home.

Will be traveling to Ireland this Easter. Apart from the puddings, it sounds like a copy of the full English Breakfast... My wife likes to make something similar for Sunday brunch.

From spencerinperu
Been a few years since I was back in Ireland and do miss the classic breakfast. But they forgot about the Irish Coffee chased with a few pints of the famous dark liquid vitamins? Here in Peru, we will try to copy it for tomorrow's St. Pats here.

I spent some time in Ireland last fall and loved the breakfast beans! I've been searching for a recipe since. Can someone point me to the recipe for the beans pictured in this article?

From candi
I do not like blood pudding... not healthy or beneficial in any book. However, I do have fond memories of family breakfast:D

From Erik e.
Dubliner cheese = One of the best cheese made! Watch out or I,ll whack you with my Shillelagh! Also Bangers got their name as the English butchers would add water to the meat before putting it in the casting to make more money. As it fried the steam would bang, pop, etc. Also... "Irish D." is right about corned beef not being common to Irish in Ireland, only across the pond in the U.S. Brine pork is what we like. Irish started eating corned beef when they could not find any brine pork in the U.S. By the way, when I was in my teens I could eat that any feel fine, now that I am well over 50 I get full just looking at it!

From Greenite
I get mine at Westbury Farms in Norwood, Mass. on Route 1 and in Walpole. Mass. off Route 1A. They sell this breakfast for about 10 bucks plus coffee. This is a rib sticking meal!

From Irish Lass
The most AWESOME breakfast ever!

A lot of the Irish food section is slightly wrong. I live in Ireland and have never once in my life had bananas and bacon or seen anyone else have it either. A very popular banana dish is the banana sandwich (brown bread with mushed up banana). "Irish oatmeal" is called porridge and the only time a sausage is called a banger is when it is in the popular ENGLISH dish of bangers and mash. By the way corned beef is not at all common and also not Irish.

The best breakfast in the whole world. I love it!

From NI Girl
It's not an Irish Breakfast without potato bread.

From paddy
You missed off Potato Bread - and your photo shows a school boy error: never put beans next to eggs - opposite sides of the plate. Otherwise, good recipe!

Whoa! Is that really what they have for breakfast in Ireland? That meal is massive. Would this just be for a special breakfast or for all the time?

From cammy
The best breakfast in the world and the number one reason to visit Ireland.

From Mike
Always the best breakfast after a long night out. I used to pay my Irish buddy to make it for me on Sunday mornings...

Can you get all of this at a grocery store?