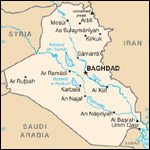 In recent years, breakfast has become a luxury for the people of Iraq. Economic sanctions imposed by the U.N. in 1991 devastated the country's day-to-day food supply. The much maligned oil-for-food program established in 1995 seemed to create more controversy than relief. The program was terminated in 2003 - the same year that Iraq was invaded by a U.S. led coalition. In 2006, traditional Iraqi breakfasts remain a rarely mentioned casualty of war.

Under the regime of Saddam Hussein, breakfast had already been in danger. During the last five years of his rein, it was reported that 400,000 Iraqi children under the age of five died of malnutrition and disease. Beyond killing breakfast eaters, the regime was literally killing breakfast. Substantiated stories tell us that Saddam Hussein ordered the clearing of millions of date palms in an effort to root out snipers during the Iran-Iraq War. As you'll see, dates are a very important part of the Iraqi breakfast experience. 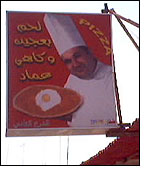 In this report, we concentrate on Iraqi breakfast as it was before foreign military intervention, as it still is when the ingredients are available, and as we hope it will resurface in the very near future.

Until 1918, Iraq was known as Mesopotamia which translates to "land between rivers". The Tigris and Euphrates rivers dissect the country and the Iraqi population is narrowly concentrated around an agricultural belt along these rivers. While Iraq receives relatively little rainfall, the soil around the rivers is well-suited to grow many crops important to breakfast including wheat, figs, dates, citrus fruits, melons, beans, onions and various herbs. Arid regions are of Iraq are better suited for growing barely, an important grain especially during times of drought. 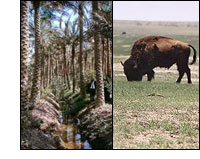 About 10% of Iraq is suitable for grazing livestock. Sheep and goat outnumber cattle, making sheep and goat milk (and cheeses) more common breakfast options than their cow-made counterpart. Buffalo milk and cheeses are also popular even though the number of buffalo in Iraq are dwarfed by the previously mention livestock.

Approximately 95% of the Iraqi population is Muslim. Of those, 54 percent are Shi'ite, and 41 percent are Sunni. The main difference between the Shi'ite and Sunni sects is a conflicting belief regarding the rightful heirs to Muslim authority, a conflict which dates back to the early history of the Muslim religion. Despite the well-known hostility between the groups, they share similar Muslim beliefs, observe the same religious holidays and eat the same breakfasts.

Until recently, a fair number of Jews called Iraq home. In fact, nearly one quarter of the population of Baghdad was Jewish during the 19th century. In 1948, the Iraqi Jewish community was estimated at 150,000. But that number has now dwindled to the low hundreds. While your average Muslim in Iraq may not be a fan of the Jews, they are quietly prone to enjoy Jewish-inspired cuisine and this is occasionally reflected at the breakfast table.

Iraqi cuisine is strongly influenced by neighboring countries, Turkey and Iran. One food writer generalized Iraqi meals as "a blend of standard Arabic cuisine with Persian influences and Turkish influence in the north."

Breakfast in Iraq is typically a light meal. Egg dishes are fairly common. Breakfast cereals are not. 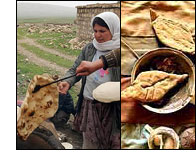 Like many countries, Iraq's primary breakfast staple is bread. A flat bread known as khubz and an oval-shaped bread loaf called samoon are found individually or in tandem at most meals. At breakfast, bread is enjoyed with butter, jam, honey, cheese, Libna (yogurt with olive oil), date molasses, sesame paste and pretty much everything else available that you can put on bread or dip bread in. Bread also acts as key component in most breakfast recipes that are considered uniquely Iraqi.

Gaymer is the word for very creamy, thick white cream made from buffalo milk. A familiar counterpart would be the better-known clotted cream. The most common use of this cream in Iraq is in a recipe called Gaymer Wa Dibis. In this dish, bread pieces are dipped into both gaymer and dibis (the Arabic word for the date syrup).

Like many Iraqi breakfast favorites, Gaymer Wa Dibis is often enjoyed from communal trays, with fingers acting as the only utensils. Some Iraqis prefer honey to date syrup. Others might add candied apricot to their Gaymer Wa Dibis. There are even variations with yogurt, olives and cheeses replacing the traditional ingredients.

A breakfast dish of Jewish Babylonian descent called Kahi is another favorite in Iraq. A relative of baklava, kahi consists of very thin folded layers of filo-style dough that is baked and then drenched with honey or a flavored sugar syrup called sheera (not to be confused with the breakfast porridge from India of the same name). Kahi is sometimes eaten with the above mentioned gaymer cream.

In Iraq, it's customary for the mother of a new bride to bring breakfast (usually Kahi) to the home of her new son-in-law the morning after the wedding.

In northern and central Iraq, beans play an important roll in breakfast. A traditional bean dish of Maltese descent called bigilla is popular as both a breakfast dish and a snack.

The main ingredient of bigilla is a special type of broad beans called "ful ta girba". The beans are soaked overnight and mixed with olive oil and other ingredients to form a paste or dip. Bigilla is almost always served with bread. A common breakfast variation is to serve the bigilla over torn pieces of bread with a fried egg on top.

A few other items you might find for breakfast in Iraq include pastries filled with dates, omelets and other egg dishes, candied oranges, rice topped with egg, chicken, various soups, bananas and melons.

Bacon, sausage and ham are very rarely seen in Iraq as Muslims are forbidden by God to eat pork.

The most popular breakfast drinks in Iraq are coffee and tea. Most Iraqis brew their coffee thick and bitter, and take it black. Tea is most often sweetened and served in small glasses. Fruit juices are also popular.

Muslim Iraqis celebrate Ramadan the entire ninth month of the Muslim year. During Ramadan, no food or water may be consumed from sunrise to sunset. Muslims believe fasting makes them stronger in their faith and helps them identify with the poor and hungry.

Breakfast during Ramadan is called suhur and it must be eaten before dawn. Suhur usually consists of grains, seeds, dates, bananas, and other foods that are considered slow to digest since their next meal may as many as 16 hours away.

If you'd ever like to make these Iraqi dishes for a friend, you may want to tell that friend about a great Iraqi custom: It is not fit to return a neighbor's dish empty. From sharing breakfast from communal trays to making sure no good breakfast deed goes unrewarded, the tradition of breakfast in Iraq should show us that most Iraqis are decent people. 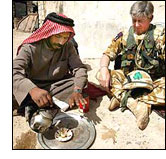 The Iraqi people may not like us too much sometimes. They may see American men as gluttons and American women as sluts. But you know what? When I'm in a bad mood, sometimes I see the world that way too. A lot of Westerners generalize the Iraqi people as the enemy. That's what you do when you're dragged into war. But we have to remember that in the end, we're all just people... we all go to sleep at night and we all get up in the morning. And through it all, when we wake, the first thing our bodies crave is not democracy, religious solidarity or blood... it's breakfast... one meal... one important way that we might find that it's better to learn about cultures and possibly even respect them, before we blindly consider them weird or immoral and denounce them. May breakfast bring our nations closer together as it does our families. Amen. (The same closing for both Christian and Muslim prayer, although in Iraq it is often spelled "Aameen" and spoken with rolling gargle sound after the first syllable.)


Note From Mr Breakfast:
Hey traveling breakfast lover! Have you been to this part of the world? Do you have a breakfast experience you'd like to share. Facebook me and I'll put it in the article.