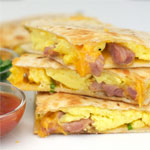 (8 servings)    Printable Version
I liked this recipe a lot, but found it slightly confusing if I just wanted to make one or two quesadillas. So, I've added a section at the end for single quesadilla instructions. I opted to use cubed ham instead of deli slices. I also added two scrambled eggs to each quesadilla. Other than that, I prepared the quesadillas as instructed. I found that they reminded me of fast food breakfast quesadillas from Del Taco - only much more fresh and full. From start to finish (including scrambling some eggs), this dish took me about 15 minutes to make. (This recipe was submitted in 2002. It was tested and photographed in March 2014.) 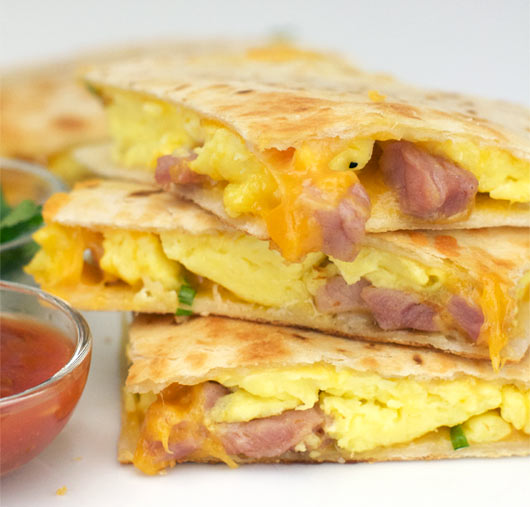 Heat a large frying pan. Brush tortilla with oil on one side. Place tortilla, oiled side down, in the pan. Add 1/2 cup cheese, 2 slices of ham and some green onions.

Cover with another tortilla, oiled side up. Cook on medium heat until tortilla is crisp on the bottom, turn over and cook until cheese is melted. Repeat as needed. Cut into wedges and serve with sour cream and salsa. 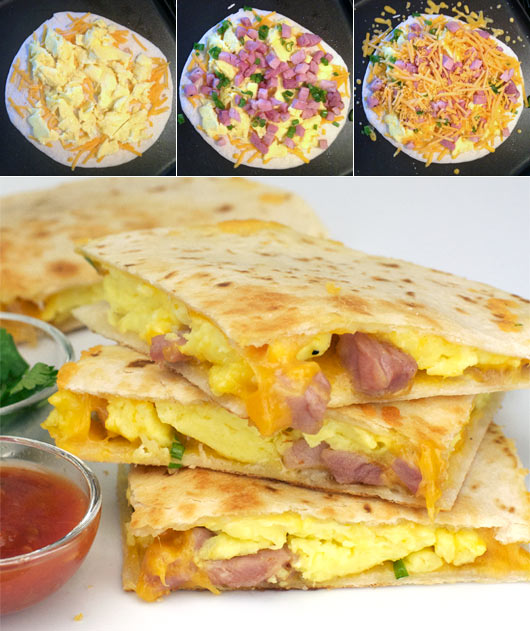 Place a griddle or large frying pan over medium heat.

Spray one side of a flour tortilla lightly with cooking spray and place it oil-side-down on the griddle.

Spread even amounts of scrambled eggs (if using), cheese, ham and green onions on the tortilla.

Cover with the other tortilla and spray the top with cooking spray.

Slice into wedges and serve.

Note: I like to sprinkle some cheese on the tortilla first and then sprinkle the rest on before covering with the second tortilla. That way, the melted cheese acts as a sort of glue holding the quesadilla together - making it easier to flip. 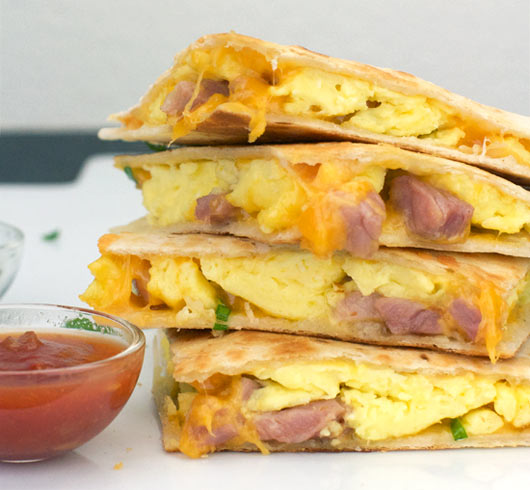 
Comments About This Recipe
What do you think of Ham & Cheese Breakfast Quesadillas?
Overall Average Rating = 4 (out of 5)
Based on 4 votes.

From Bigbroski
I prefer using hard fried eggs. They don't fall out as you eat like loose scrambled eggs do.

From Steven
A fab breakfast if decadent enough to require staying a secret.

From DonnaQuixote
Very good idea, and fast and easy to make. A lot of happy breakfast munching was had.

From Guy From GA
It was really good with a combination of Pepper Jack cheese and Cheddar. Also fairly easy to make.

Can this dish be frozen?