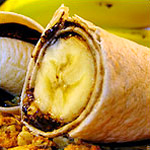 So fast to make. So good to eat. Whipped cream is optional by very recommended. It makes the dish look like something from a nice restaurant.


Comments About This Recipe
What do you think of Banana Burritos?
Overall Average Rating = 4 (out of 5)
Based on 13 votes.

From Tam
I'd think you can skip the sugar all together on this one. Bananas are pretty sweet on their own and so is peanut butter and nutella both. Much healthier to cut out the need for sugar. Don't get me wrong, I love sugar but it doesn't love me. I'm having to cut it out of my diet due to high triglyceride levels. For those who need the lower GI, they could do this with little to no sugar and still taste good because bananas already are pretty sweet on their own.

From S. Holiday
My daughter asked me to make these again. She calls them "fancy bananas".

From goldie
I think it would be even better with one of those store-bought crepes. But anything with Nutella is good with me.

Here's something else to try for a odd breakfast:

1. Cook some bacon until it's just how you want it.

2. Take some bread and toast it until light brown.

3. Spread some peanut butter on the bread.

4. Place chopped bananas all over the bread.

5. Sprinkle some cinnamon over the bananas.

6. Add the bacon strips and eat up!

I really liked it because it was something different. So give it a try and you may say the same!

From Zolman
You could deep fry it also, make it a chimichunga. Not as healthy, but deep fried banana is killer.

From Natster
It's tasty and filling. I agree that a crepe would make it yummier.

From Zimmy
I make them a little differently. For sweetness, I add honey rather than sugar. If you don't like the taste of honey, you can use agave syrup. I also use granola to give it crunch.

Instead of a tortilla, this would be great with a crepe!

From Manuel Ruiz
With Nutella spread it's extremely delicious!!

From me and many

You can get macadamia nut butter with no peanut traces from Hawaii by mail order which is great for those of us cooking for peanut allergy sufferers. Plus, I think it would taste even better! (There is also sunbutter made from sunflower seeds.)

From Oily Miliken
Make it a wheat tortilla it sounds health enough.

From redcop
Great idea!!!! I think I'll squeeze a little bit of lemon juice on the banana.

From Jessica Rabitt
I loved this, plus it's healthy! Thank you New Jersey Girl and Mister Breakfast. You rock!