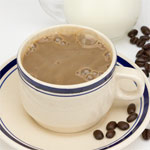 (4 servings)    Printable Version
Café con leche translates from Spanish to English as simply "coffee with milk". While easy to make, the beverage has more complexity of flavor than the name implies. The milk is scalded (gently boiled) which brings out a creamy dairy flavor that's less apparent when milk or cream is added cold or at room temperature. If you don’t have a French press, use strong, fresh drip coffee. (This recipe was photographed by Mr Breakfast in August 2014.) 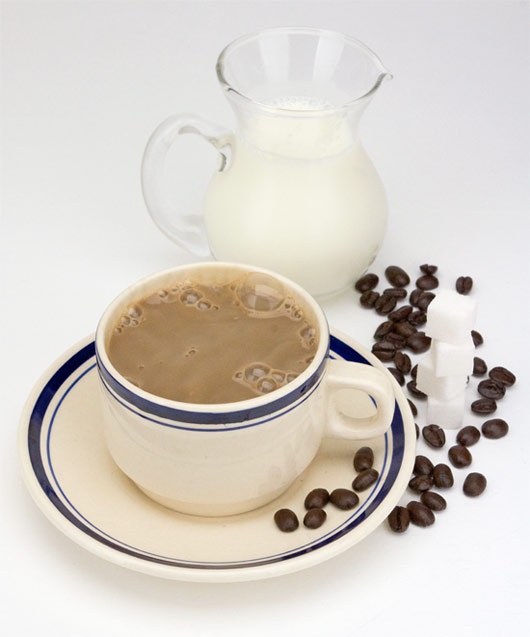 How To Make Cafe Con Leche

Place the grounds in the bottom of your coffee press. (If you don't have a coffee press, you can get by with a glass pitcher.) Add the boiling water and allow the coffee to steep for 5 minutes.

While coffee is steeping, place milk in a sauce pan over medium heat. Bring the milk to a low boil and immediately reduce heat to a simmer - stir occasionally.

Back to the coffee... press down the plunger of your press to strain the coffee grounds. (If no press, use a fine strainer to remove grounds.)

Transfer hot milk to a serving pitcher. Add coffee to the milk. 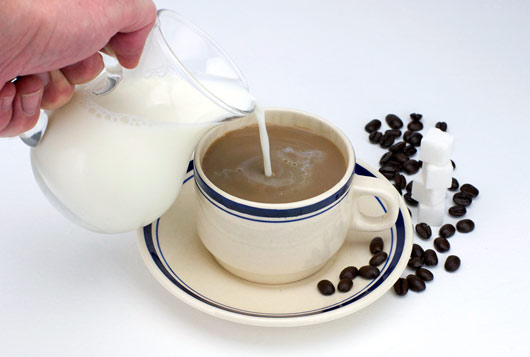 Add sugar to taste. A little cinnamon sprinkled in each cup is nice optional final touch.

Mr Breakfast would like to thank CornFlake for this recipe.


Comments About This Recipe
What do you think of Cafe Con Leche (Mexico)?
Overall Average Rating = 5 (out of 5)
Based on 2 votes.

@flo - It is also a Mexican recipe.

From Bueno A1
At first, I thought this was lame because I always have milk and sugar in my coffee. But I gotta say... there's something about warming the milk first that makes it taste different and pretty cool. Warming the milk is a bit of a hassle when you're just waking up, but I'd make it again. Maybe just on the weekends when I have more time. Plus... a dash of cinnamon at the end is a must. My final summation: Muy Bueno!

From Elvis R.
Always amazing. Greatest drink in the world.

Cafe con leche is not a Mexican recipe it is actually used throughout the Carribean.