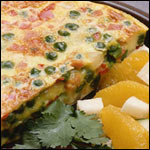 The word quiche is from the German word Küchen’ which means cake. The dish originated in a region of northeastern France called Alsace-Lorraine. While quiche is widely considered a French dish, it is interesting to note that - at the time of its creation - the region of Alsace-Lorraine was a German provinve called Lothringen. A well-known quiche made with cheese and bacon is named for the region... Quiche Lorraine.

Quiche became popular in the U.S. during the 1950's. In 1982, an irresponsible author by the name of Bruce Feirstein published a book titled "Real Men Don’t Eat Quiche: A Guidebook To All That Is Truly Masculine". Quiche - presumably because of it often contained vegetables - was suddenly considered an unmanly dish. Fortunately, male food lovers now know that definining masculinity based on a book by Bruce Feirstein is about as unmanly as a man can be.

By strict defintion, a quiche is a pastry shell filled with a savory custard made of eggs, cream, seasonings and various other ingredients. It has also been defined as "a savory, open-faced pie made from cheese and eggs". But this definition fails to include many modern quiches which exclude cheese. Quiche can be served as an entrée for any meal.

Fillings for quiches seem to be limited only by one's imagination. Mr Breakfast offers many quiche recipes with fillings that include common breakfast meats, various vegitables and fruits and even seafood.

Recipes with "Quiche" in the title:

Recipes with "Quiche" in the ingredients:


The editorial content above may not be reproduced without the written permission of Please contact us for reprint requests.
Site Index/Glossary
A|B|C|D|E|F|G|H|I|J|K|L|M
N|O|P|Q|R|S|T|U|V|W|X|Y|Z
Related Terms:
Souffle
Egg
Breakfast Pie
Ramakin