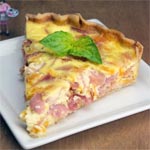 (8 servings)    Printable Version
This is sort of a no-nonsense, working man's quiche. The ingredients are simple and preparation and clean-up are a breeze. If you wanted, you could add 1/4 cup of sauteed vegetables or make changes to the meat and cheese you use. I stuck to the recipe as submitted and really liked the results. The only change I made was reducing the light cream (I used half & half) to 1 and 1/2 cups because I used a regular pie pan instead of a deep dish one. (This recipe was submitted in 2003. It was tested and photographed in June 2014.) 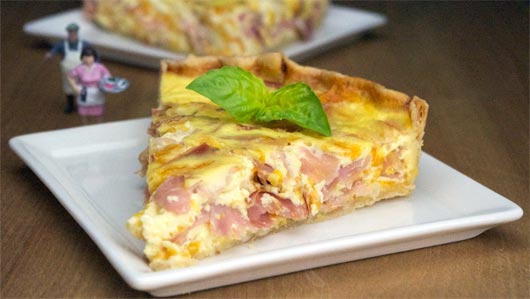 How To Make A Ham And Cheese Quiche

Beat the 4 eggs. Whisk in the light cream until well blended. Stir in the flour, salt, pepper, cheese and ham.

Pour into pastry shell and bake in preheated at 375 degrees oven for 50 to 50 minutes. Enjoy! 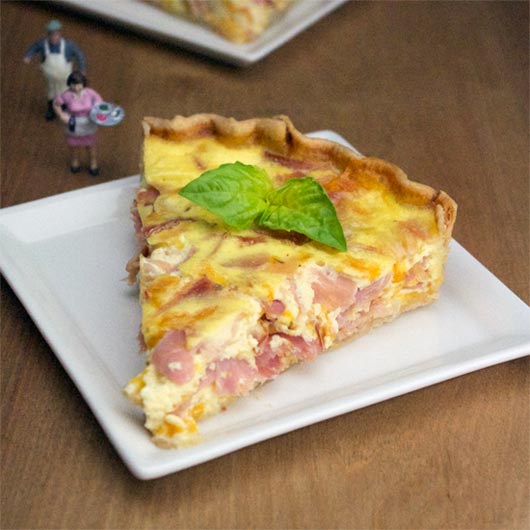 For best results, par-bake your crust for 8 to 10 minutes before filling. Poke a few holes in the bottom of the crust with a fork first to prevent it from warping.

After 50 minutes of cooking the filled quiche, I found that it was fully cooked and the egg had a soft, scrambled-egg-like texture. At 60 minutes, the egg was more firm, producing a quiche that would still hold together well at room temperature (European style).

You can fill the pie crust to the brim with the egg mixture. You may have a little egg mixture left-over. I ended up with about 1 Tablespoon more than I needed.

You can go crazy with this easy recipe... like instead of ham you can add almost anything. Try mushrooms or bacon or even your favorite veggies.

Mr Breakfast would like to thank tigerlilly for this recipe.


Comments About This Recipe
What do you think of Ham And Cheese Quiche?
Overall Average Rating = 4 (out of 5)
Based on 9 votes.

I wonder if you could make this in a muffin pan and leave out the crust. Has anyone tried it?

From LillyPip
I was worried the amount of cream was too much so I made it with 1/2 cup milk and 1/2 cup cream and it turned out great.

From gilford
Good Sunday breakfast. I accidentally left out the flour and it still turned out great. What is the flour for? Didn't seem like it was needed. Good recipe.

From khilliard
This ham and cheese quiche that I made was very good. I was very nervous making it, but it turned out to be rather delicious. Only my mom and my sister tried this recipe, and they loved it as well.

From cookiesandcream
I made this quiche for our office breakfast and it was wonderful. Make sure to bake crust 8 minutes before adding quiche. Also, make sure to use no more than 1 cup of half and half. This recipe is a keeper!

Very simple and easy. Haven't made yet but am very excited.

From Connee (Team Breakfast Member)
I took advice to pre-bake shell, and used a cup of liquid, but used 1/2 half and half and half skim milk (how many times can you use "half" in a sentence? lol)... tried 5 eggs, but it was too many. Also threw in a little onion and fresh spinach with the ham and cheese. Turned out wonderful!

From Ev
Very good recipe. I prebaked my pie shell for 8 minutes at 400 degrees. It created a flaky crust even on the bottom. I also added mushroom slices and chopped onion.

From Peachy (Team Breakfast Member)
I give this recipe 5 eggs for versatility. When I went to make it, I had no ham and no light cream. I substituted diced smoked turkey and half and half. It was fabulous! I also took the advice of the previous commenters and used only 1 cup of h&h.

From Sunny
GREAT! The cream does need to be cut in half though as I had an overflow with the 9" deep crust shell. Quick and simple, great for fast meal. Thanks!

From GG
This was a very simple and wonderful recipe.
I cut the cream in half and it was fine.