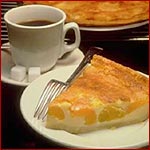 Your Guide To Breakfast Pies

The history of pies, in general, dates back to 2nd Century B.C.. Briefly stated, the Greeks invented it. The Romans invaded Greece and stole it. Jumping ahead to 15th Century A.D., pies had spread throughout Europe. The recipes had become very diverse.

From Linda Stradley's History Of Pies:
(In 15th Century A.D.) Animated pies or pyes were the most popular banquet entertainment. The nursery rhyme "Sing a Song of Sixpence... four and twenty blackbirds baked in a pie," refers to such a pie. According to the rhyme, "When the pie was opened, the birds began to sing. Wasn't that a dainty dish to set before the King?" In all likelihood, those birds not only sang, but flew briskly out at the assembled guests. Rabbits, frogs, turtles, other small animals, and even small people (dwarfs) were also set into pies, either alone or with birds, to be released when the crust was cut. The dwarf would emerge and walk down the length of the table, reciting poetry, sketching the guests, or doing tricks.

By the 19th century, apple and other fruit pies were common at the breakfast table in rural homes throughout America.

In our time, pie is no longer common for breakfast. Most of us have had left over pie from the previous night's desert for breakfast. It's a great treat, but hardly a morning staple.

When we consider that the history of pies, in general, predates Christ, the history of breakfast as we know it -- eggs and bacon and Cap'n Crunch et al -- is a relatively new phenomenon. The practice of going to a restaurant for pancakes or an omelet in the morning is barely 100 years old. So in many ways, breakfast pie is the infant prodigy of pies.

I was asked recently, "Mr Breakfast, what makes a pie a breakfast pie?" Certainly, any pie eaten as the first meal of the day qualifies. At the risk of adding a new chapter to the saga of the pie, I offer the following response.

A breakfast pie is a pie served for breakfast whose defining ingredients include items which could be considered breakfast foods at the time the pie is made.

Like love, a breakfast pie is often hard to define. We know how to express it. We know how we like to have it. But we are constantly amazed that both love and breakfast pies, if there is a way to separate the two, appear to us in so many ways.

Among the egg, cheese and bacon pies below, I've included a Lime Yogurt Pie. Many active dieters opt for yogurt in the morning. So when we add yogurt to pie, it becomes a breakfast pie. It is a kind of magic.

I've also included a Macaroni and Cheese Breakfast Pie. What right do I have to call a Macaroni And Cheese Pie a breakfast pie? What right did 15th Century Aristocracy have in concealing birds and midgets in crust and calling that pie?

And again we come to Love. Any ingredients placed within the confines of a pie-structure creates a pie. It may not be your kind of pie. But if it was baked with the intention to become a pie, it becomes a pie.


Quiches are a kind of breakfast pie. Here's your doorway to 18 breakfast quiches.