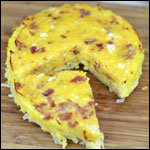 (6 servings)    Printable Version
This recipe was sent to me by a Bed and Breakfast in Toney, Alabama way, way back in 2002. Flash forward to this morning in December of 2012... I had half of a bag of those hash brown potatoes that you buy in the grocery store and I wanted to use them up. So I pulled up this old gem and went to work. Since I had less hash browns than this recipe requires, I used a different sized pan and adjusted the ingredients accordingly. You can see my alternate recipe below this one. The pictures here are for the adjusted recipe.

I really enjoyed this quiche. It was cheesy and satisfying. My only regret was that the hash brown crust wasn't more crisp. I'll keep working on that. That said, I still liked it very much. The potatoes cooked through thoroughly, the egg set and the cheese melted. I declare a success (with a little room for improvement). 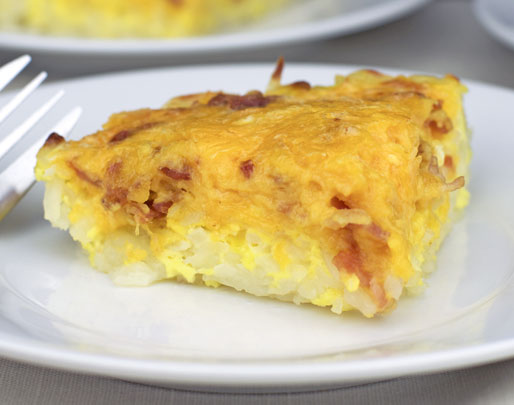 How To Make A Hash Brown Quiche

Press hash browns between paper towels to remove moisture. Press hash browns onto bottom and up sides of a 9-inch pie plate to form a crust. Drizzle melted butter over crust. Bake at 425 for 25 minutes. Remove from oven. Reduce heat to 350.

Bake uncovered at 350 for 25-30 minutes or until a knife inserted near the center comes out clean. Let stand for 10 minutes before serving. 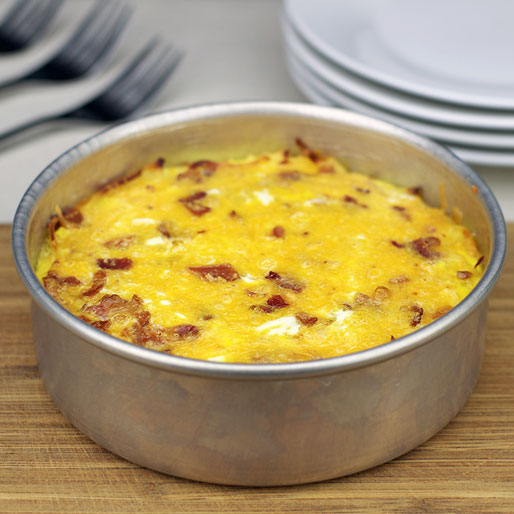 Follow the directions for the originals recipe, except let the pre-baked hash brown crust cool for 5 minutes before adding the other ingredients. 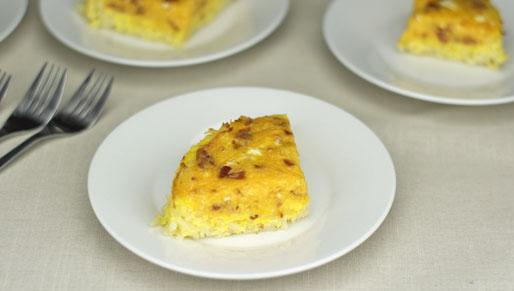 In this quiche, refrigerator-fresh hash browns becomes the crust to hold a combination of eggs, Canadian bacon and two kinds of cheese.


Comments About This Recipe
What do you think of Hash Brown Quiche?
Overall Average Rating = 4 (out of 5)
Based on 5 votes.

From C.S.
I have made this several times in a pie plate instead of quiche pan. I also vary the cheeses based on what I have on hand. I like it very much and it is a favorite at my house!

From LucyBradley
I used 4 eggs so it would make a little more and used regular bacon (cooked and crumbled) instead of the Canadian bacon. It came out wonderful.

From cmh
Very good. I used veggie bacon and added avocado and olives. I think you could cut the butter by one half and not lose much.

From SaveKen
More of a casserole than a quiche, but really tasty whatever it was. B+ from me.

From Bit of a Kick
I once visted the Lanvender Hill BB in Sonora Calif. They made this dish and it was sooo wonderful I got the recipe myself and have made it ever since. I have modified it a tad though. I use 3 eggs and use half cup sharp cheddar and half cup of pepperjack, it adds a bit of kick to the taste.