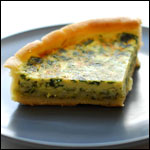 Quiche with Spinach, Mushrooms and Cheese

(6 servings)    Printable Version
For the pastry crust: Combine flour, sugar and salt in a large bowl. Add the butter, and using a pastry blender, cut the butter into the flour mixture until it resembles coarse meal, with some crumbs the size of peas. (It is important that the mixture is not totally uniform.) Combine the creme fraiche and water. Add the creme fraiche mixture to the flour mixture, stirring with a fork. The dough should still be rather dry, but add up to 2 tablespoons of water until the dough gathers into a ball, but is not sticky. Wrap in plastic wrap and refrigerate for at least 1 hour.

On a floured surface, roll the dough into a 12-inch circle. Transfer to a 9-inch pie dish or tart pan. Refrigerate for at least 1 hour to allow the dough to settle.

Preheat oven to 400 degrees F. Prick the crust all over the bottom with a fork. Bake for 17 minutes. (If within the first few minutes of baking, the pie crust starts to balloon a bit, just push the ballooning areas back down gently with your finger.

While the crust is pre-baking, prepare the filling. Heat 1 tablespoon olive oil over medium-high heat. Saute the mushrooms until they are lightly browned. Add the shallot and spinach and continue to saute until the spinach is bright green. Season with a bit of salt and pepper and set aside.

Remove the pastry crust from the oven and lower oven temperature to 350 degrees F. Sprinkle the shredded cheese over the bottom of the crust, making sure to cover any holes in the crust with the cheese (this will prevent the crust from leaking). Add the spinach mushroom mixture, then pour the egg mixture over it. Bake for 30 minutes, or until the crust is brown and the filling is golden and puffy.

Makes one 9" quiche. *The best part of this is the cheesy layer on the bottom of the crust. It keeps the crust from getting soggy


Comments About This Recipe
What do you think of Quiche with Spinach, Mushrooms and Cheese?
Overall Average Rating = 5 (out of 5)
Based on 4 votes.

From gritty
This was so good! I left our the shallots due to having a guest that won't eat them, and I used a pre-made refrigerated crust. It was still delicious!

From HollyMartel (Team Breakfast Member)
I found this recipe on www.crispywaffle.com!