(4 servings)    Printable Version
For best results, read the "Recipe Realities" section at the end of this recipe.

Work the butter and flour together with your fingers until the texture resembles coarse sand. Add the egg yolk, salt and cold water and mix until a firm dough forms. Wrap in plastic wrap and chill for 1 hour, or until needed.

Roll out half the the dough to line a 10-inch pie pan. Prick here and there with the point of a knife or a fork. Crimp the edges with the tines of a fork. (Save the rest of the pastry for another pie.)

Scatter diced ham on the crust.

Saute sliced onions in butter until they are soft, but not brown. Spread onions over the ham.

In a saucepan, beat 4 eggs with a good pinch of salt, cayenne and a light grating of nutmeg.

Continue to beat the mixture over a low fire until the custard begins to thicken.

Pour mixture into tart shell and bake in a moderate oven (375 degrees) for 30 minutes, or until the custard is set and the top is golden. Serve hot, directly from the pan. 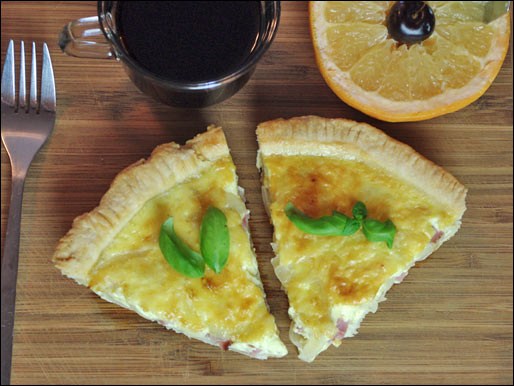 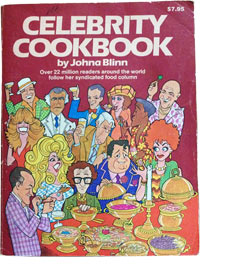 This recipe is from the 1981 book called Celebrity Cookbook by Johna Blinn. Other breakfast recipes in the book include Elliott Gould's Western Omelet Supreme, Harry Reasoner's Eggs Benedict, Eydie Gorme's Spinach Frittata and Natalie Wood's Eggs Ranchero. The book is out of print but you can occasionally find a used copy on Amazon. I scored and found it in a thrift shop for a dollar.
Recipe Realities:

With all due respect to Alfred Hitchcock, his recipe turned out great but it can be tweaked to be even better.

The amount of pastry crust is enough to line a 10-inch pie pan and maybe 2 muffin cups.

I'd recommend reducing the amount of milk for the filling to 1 and 1/2 cups if you're making just one 10-inch quiche.

The process of mixing the eggs with hot milk and stirring over low heat is unnecessary. If you just mix the filling ingredients together, you get the same result.

I would strongly recommend par-baking the pastry crust. Bake the crust by itself for 8 or 9 minutes at 375 degrees before filling. Otherwise, the bottom of the crust will be slightly underdone.

If desired, you can sprinkle 1/4 cup of your favorite shredded cheese over the ham and onions to give this quiche a bit more flavor and to make it your own.

For an in-depth look at the making of this recipe, check out my blog post Making Quiche Lorraine With Alfred Hitchcock.

This quiche with ham and onion was one of famed director Alfred Hitchcock's favorite meals. From the 1981 Celebrity Cookbook by Johna Blinn.


Comments About This Recipe
What do you think of Alfred Hitchcock's Quiche Lorraine?
Overall Average Rating = 4 (out of 5)
Based on 2 votes.

From fingerlikin (Team Breakfast Member)
You should par-bake the crust on its own for 6 to 8 minutes and then when everything bakes - for the last 10 minutes - wrap tin foil around the edges of the crust so it won't over-brown. The crust turns out more flaky with those steps.

From David RK
Two whole onions seemed like too much to me, so I did one onion and added an extra egg and a handful of shredded Cheddar. Also, just mixed eggs and spices together in a bowl - not in sauce pan. It worked great that way. Took about 40 minutes to cook.