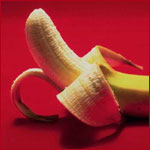 A banana a day keeps the doctor away... and the dermatologist...and the psychologist... and if current research can be trusted... death. It seems there's almost no ailment that the banana can't help cure. The word "banan" is Arabic for finger.

The banana is unique among fruits. Rather than growing on trees, bananas come from the world's largest herb, Musa sapientium, which is directly related to the orchid family. They are believed to be the first fruit farmed by man. Available all year round, they are currently the most popular fruit in North America.

In February 2002, the International Banana Association reported that 60% of respondents in a recent study had a banana for breakfast at least once a week. The Mr Breakfast Institute of California (MBIC) recommends that bananas be included with breakfast at least twice a week.

According to a 2003 research project conducted by MBIC, bananas may aid in alleviating a very long list of ailments.

What Bananas Cure: Numerous other conditions are said to be cured by bananas by old wives, if not yet by scientists. Consider using bananas to relieve hangovers (blend with milk and honey), heartburn, morning sickness, mosquito bites and warts (apply the inside of peel to irritated skin).

The Oxford English Dictionary recognizes the term "going bananas" as a comical series of actions associated with moneys picking bananas. But the only comical monkey in these days of modern science is a fool who doesn't eat bananas.